The first meeting between Jess Jackson and Pierre Seillan must have been fun to witness. The Frenchman, who at 71 retains the physique of the rugby player he was, met Jackson (of whom it was said, liked to be photographed in front of a mountain – preferably one he owned) in the mid-1990s. Seillan spoke little English but the two hit it off, and they and their young families formed a lifelong friendship. The story of how they came to make Vérité, a wine that is now considered one of the finest Bordeaux blends in the world, hardly needs retelling…

In a nutshell, Jackson asked Seillan – who by that stage had been making wine for 25 years in his native Gascony, in the Loire and in Bordeaux, and who was looking to escape what he saw as the stifling French appellation system – if it would be possible to make a Sonoma wine as good as Pétrus. Seillan replied: ‘Why not better?’

After the first (1998) vintage – a 90 percent Merlot blend with Cabernet Sauvignon, which Robert Parker considered one of the best Northern California reds – Seillan decided to make more wines based on the three great Bordeaux grapes. That range became the Vérité trio that we know today: La Joie is Cabernet-dominant, La Muse is a Merlot, and Le Désir realised Seillan’s lifelong love of Cabernet Franc.

Asked why he decided to make three wines instead of one, Seillan replies, somewhat gnomically, ‘It’s because I wanted the answer to this beautiful country that was welcoming me – it was my way of saying thank you.’

The origins of Vérité

After he and Jackson had come to an agreement, Seillan was given the freedom of the Jackson Sonoma holdings. In Alexander Valley alone, the Jackson ranch was 6,000 acres (2,500ha), of which 850 acres (345ha) were developed. ‘It had exceptional potential – not many people have the chance to work with terroir of such complexity, in terms of elevation, soils, microclimates and so many other variables. It was a first for me,’ says Seillan.

Then there was Knights Valley at the foot of Mount St Helena. This land is lower, and facing west it is open to the cooling Pacific wind. In Bennett Valley, Seillan created a new vineyard, Jackson Park, an east-facing elevation which goes up to 1,500 feet. It had never been developed – ‘only wildlife and cows’ – and Seillan planted Merlot and Cabernet Sauvignon and set out to make it the first of his micro-crus. ‘This was very exciting,’ he recalls, ‘We had 36 different blocks.’

The idea at first was simply to see what the land would give them, and vinifications were watched obsessively (‘I was very humble in front of the tanks,’ the bullish Frenchman says). The idea at first was to make a Merlot-Cabernet blend; the 1998 vintage was cool and rainy – ‘It was a nice way of starting, with a vintage that looked a little bit like Bordeaux.’

Before he met Jackson (who he describes as ‘a superman’), Seillan had worked only within the constrictions of the French appellation system. The freedom of an American AVA was a revelation. ‘If you want to develop something unique in Bordeaux, you’re limited. In California, I had carte blanche: not only with Jess, but with the terroir, and the law, and the expression of the land, the influence of the Pacific… I could develop something – I was allowed to be free.’

There were two wines from the 1998 vintage: first there was the Merlot-Cabernet Vérité, and a Cabernet-dominant wine they called simply La Joie (without any mention of Vérité on the label). Then in 2000, the Cabernet Franc-based Le Désir was added; that year became the first outing of the three-cuvée label we know today.

The three wines are now blends of some 60 different blocks sourced from about a dozen Jackson Family vineyards in Alexander Valley, Knights Valley, Bennett Valley and Chalk Hill.

What goes into making Verité?

A combination of instinct and science. Hélène Seillan, who is 34, has been working with her father since her pre-teen years and is an accomplished winemaker in her own right (she had her own Cabernet Franc blend, Cenyth, until 2016 when she gave it up to concentrate on Vérité). She stresses the instinctive nature of their winemaking: ‘Because we have so many different micro-crus and soils, of course we do analyses to check brix and acidity. But we definitely don’t decide picking based on that: there’s a little bit of science but it’s usually ignored – we’ll get the analysis back in the email and go “Yeah, whatever”.’

As with all great wines, most of the work goes on in the vineyard (‘the vinification is the least interesting part,’ Hélène says). Seillan likes to cultivate his image as a maverick, ‘a wild farmer’ striding the hillsides seeking the true meaning of the soil (vérité, indeed). ‘I went a little bit crazy. In spring I rubbed the grass between my hands and smelt it, and then pulled the leaves off the trees and rubbed and crushed them. I wondered about the intense aromatics, and I saw how different it was to Bordeaux.’ The soil itself had far more latent power than he was used to, so vinification had to be as gentle as possible – ‘if you don’t control them, the tannins can be the worst in the world.’

When you consider the number of variables father and daughter work with every year, you can see why instinct takes precedence over science. Blending takes place over about two years, the team working with 50 or 60 different samples aged in many different types of oak with varying levels of toast. Seillan selects only the tightest-grained wood from some 15 French forests, which are shipped over to be coopered in Missouri. It can’t be easy to source exactly the right oak – there are a lot of politics involved in barrels, and an unsuspecting winemaker can find he’s been fobbed off with inferior material. ‘Some people find it difficult to get hold of the best wood,’ Seillan says, deadpan. ‘But early on Jess did a deal.’ There are advantages to working with one of the world’s most powerful wine families.

For all the power of the Jackson name, Seillan père et fille stress how little they demand in terms of resource. A new chai is being built with – for the first time – temperature-controlled tanks. While she concedes that the optic sorter is one piece of equipment she couldn’t do without, Hélène says, ‘up to now we’ve been so old-school compared to other wineries. Dad has never asked the family for a better cellar. I’m afraid of tech and too much automatic stuff; I’m completely in tune with him in that way.’

Classy Napa wines favour the most minimal of designs; the Vérité label carries no excess weight. There are seven words, a stylised ‘V’ and a four-section diamond (the diamond, in Native American lore, has a host of different meanings, from an invocation to the power of the four winds, to a symbol of the unity, freedom, eternity and balance of life).

According to Seillan, Jess Jackson had the name Vérité in mind long before the wine came into being. ‘The goal was to make a wine without compromise, and to call it “Truth.” He also thought of La Joie, which for him was the expression of the happy, macho Cabernet Sauvignon.’ The two of them came up with ‘La Muse’ for the Merlot-dominated blend because ‘it was soft, and shy, like a muse.’ The last of the trio, Le Désir, was Seillan’s coinage. ‘It was my desire to make a Cabernet Franc, so that’s what I called it.’

What’s next for Vérité?

About 5,000 cases of Vérité are produced (with La Joie accounting for some 1,800 cases) and there are no plans to increase production. In fact, there are no plans to change anything. Stability is all. ‘We want to keep it the same – that’s the hardest part,’ Hélène says. The new chai will increase the number of small tanks to allow even more precise vinification of the micro-crus, but there are very few other changes planned.

In terms of vineyards, the first plantings are now 35 years old, so there is a rolling programme for replacing vines. Seillan is also always on the lookout for new terroirs as he stumps around the vast Jackson holdings, or flies over them in a helicopter. ‘Dad will find a spot that might already have some terrible vines on it and he’ll say, “This will be great for Merlot”.’ So new micro-crus come on stream every few years, ‘but you’d never be able to notice the difference in the blend – when we incorporate a new micro cru, it’s still only three or four per cent.’

Even the handover from father to daughter – when it comes – will be scarcely perceptible. Pierre Seillan has mentored Hélène through every stage of her winemaking career. ‘We’ve worked together since 2006 and tasted together since I was a young child – he educated me and my palate,’ she says. Hélène has no job title (‘Call me whatever you like’), but the pair treat each other as long-standing partners. ‘We work well together,’ Hélène says. ‘No, there aren’t plans. We simply want to keep the identity of each wine and for each to stay true to its style. In 30 years’ time I want La Muse to have exactly the same signature that it had when the first bottle was made.’ 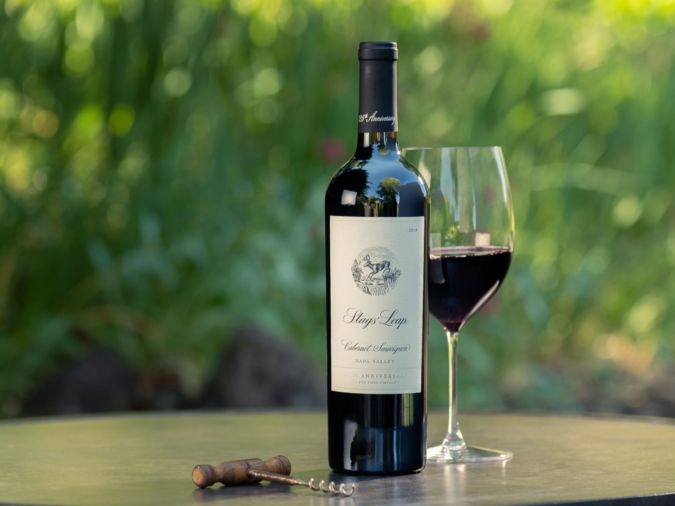