Two fabulous wines: Sassicaia 2009 and Château Pichon Baron 2009. The first was at Annabel’s (it was the only time we dined out in 2020, so we decided to keep it low-key); the second was locked down at home on Christmas Day, when, thankfully, we ended up with only three wine drinkers around the table instead of the usual dozen thirsty quaffers. Wonderful wines, symphonies of freshness and elegance. But both so uncool it’s almost embarrassing to mention them.

Do you remember when Bordeaux was quite the thing? When the Médoc was the reference point for elegance and freshness? When opening a wine from one of great properties of the left or right bank in a fine vintage could be chic as well as elite? Bordeaux is still bankable of course, and there’s no gainsaying the beauty of a great wine. But in a barely perceptible twitch in the tectonic plates of international wine fashion, it’s no longer actually cool.

Over the other side of France, the Burgundians have always claimed to be rough-hewn farmers while the Bordelais are châtelains. These days, to be an honest tiller of the soil is the benchmark of authenticity – and that’s a difficult trick to pull off when you’re farming a hundred hectares rather than half an acre. Not all Bordeaux producers work on such a scale of course, or have grand châteaux, and there are some equivalents of, for example, Burgundy’s Mark Haisma, who is happy making wine in a functional shed on an industrial estate below Vougeot. But they aren’t as celebrated or well documented – and as a consequence, Burgundy, the embodiment of small-scale authenticity and terroir, has taken Bordeaux’s crown.

Don’t panic – the value of great Bordeaux isn’t going to crash (though it’s never again going to reach the heights of ten years ago – bad luck if you bought Lafite ‘09 at the top of the market). And nor is Sassicaia’s price going to fall through the floor. But some of the SuperTuscans are heading in the same direction. Walter Speller argues as much in next month’s print edition of Club Oenologique: Sassicaia ticks all the wrong boxes. It’s made in a non-traditional region (Bolgheri) with a non-indigenous variety (Cabernet Sauvignon); and was always the darling of Robert Parker – and you can’t get more irrelevant than that these days.

But, but, but. The wine is delicious – surely all other criteria are meaningless? To paraphrase Oscar Wilde, a wine is either well made or badly made, and to call it unfashionable is to miss the point.

I find it exhilarating, though, to see how the wine trade, which has ever been a byword for conservatism, is turning out to be as radical as rock n roll. When I started up decanter.com (yes, in the last century! – we were predated online only by Berry Bros and the BBC) I wondered if we should demystify wine for a wider audience. Was I crazy? The whole point was to keep the mystery, I was told. I might as well have suggested translating the bible from Latin.

Heaven knows what would have happened if I’d suggested a feature on natural wine. This was a world where describing a wine as smelling of “wet knickers” (that’s an actual quote from a Michael Broadbent tasting note) was amusingly risqué rather than beyond the pale. It was not an environment where you questioned the hierarchy of Bordeaux and Burgundy; the SuperTuscans were rebels, certainly, but they were the right kind of rebel – they were using Bordeaux varieties for a start, and although they were Italian, they were still very posh indeed.

Everything now is questioned, and fashions change with bewildering speed. “For God’s sake don’t bring a natural wine,” someone said before a bring-your-own dinner club I used to go to a couple of years ago. They wouldn’t say that now. Natural wines have reached a level of excellence they didn’t have then, it’s true, but they’ve also reached a level of acceptance – they’re not even radical any more.

It’s easy to see how reputations which seemed solid as bedrock can begin to waver. I was talking to one of wine’s great pioneers last week. Gaia Gaja learnt at the feet of her father Angelo, whom she describes as a natural contrarian (he was also “like a caged lion” during lockdown, she said, but that’s another story). The Gaja Barbarescos are the epitome of wines of place, but Gaja also makes wine from Sauvignon Blanc and Cabernet, Merlot and Chardonnay, in Bolgheri and Montalcino, and last year we saw its first wines from the slopes of Mount Etna. She had little patience with the idea of the Cabernet-based SuperTuscans being on the wrong side of history. So what if they’re not made from Sangiovese? Innovation is adaptation with the intention of improvement. And what is improvement if not enhancing the elegance and perfume of the wines?

Authenticity is the gold standard, as it has always been. But authenticity should refer to what’s in the glass, not be subject to the shifting sands of fashion, the size of vineyard, the grapes’ ancestral claim to the land, the techniques used – or not used – in the winery. For me, authenticity is simply whether the wine has complexity, elegance and perfume. So hang onto your Sassicaia for a while yet. 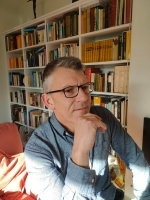