French restaurants, hotels – and wineries – are open for business again, and wine lovers languishing in the chilly reaches of the UK and the rest of northern Europe are buoyed by the enticing thought that summer might not be a write-off after all.

For the most part, the first half of 2020 was just that, but as restrictions ease (and in some cases almost disappear) it’s quite feasible to be spreading out your maps and planning an escape further south. You may have to scale back your holiday plans (most of us, after all, would rather crawl bare-kneed over the Alps than submit ourselves to the vagaries of air travel at the moment); and we’re not suggesting we can turn back the clock to the great age of motoring holidays, but France by car is an increasingly alluring and practical compromise.

Châteaux and domaines from the Loire to Haute-Savoie are largely now open as (just about) normal. Restrictions apply of course – you’ll have to book ahead in most cases, and tastings may be slightly more complicated – but there’s nothing to stop you strapping a picnic basket to the back of the Bentley and zooming south. The aires de répos are open, and although the autoroutes aren’t as eerily quiet as they have been, traffic (at the time of writing) is noticeably light.

We’ve put together two French wine tours that we’ll present over the next weeks. For a European visitor they have the beauty of being navigable purely by road. All you’ll need is a corkscrew and a passport.

Our first tour starts a short hop from Calais, where you disembark from Eurostar and take the A26 for the three-hour drive to Epernay, stopping for a picnic at one of the two aires on the way. After a couple of nights overlooking the vineyards in the Royal Champagne Hotel, it’s on to Chablis before the wonders of the Cote d’Or, then – as a suitable finish – a night or two sampling the gastronomic delights of Lyon.

Your first night is spent at the newish and ultra-plush Royal Champagne Hotel, which has two restaurants, and a terrace overlooking Epernay and a panorama of grand cru vineyards from Verzy to Äy.

As part of its “Bubbly Summer” package the hotel throws in a visit to Champagne Leclerc Briant, a biodynamic house owned by Royal Champagne’s proprietors Mark Nunelly and Denise Dupré. Leclerc Briant’s reputation is solid, and it’s known for its innovative ageing methods, which feature clay amphorae, a 24-carat gold barrel, and a cuvée aged in bottle 60m deep in the Atlantic Ocean, off the Breton island of Ouessan.

When booking direct on royalchampagne.com, guests redeeming the code MAKEITPOP will receive a complimentary bottle of Champagne in their room

No trip to Champagne would be complete without a visit to one of the legendary “crayères”, the hundreds of miles of cellars hewn out of chalk by the Romans that underpin some of the great Champagne houses. Only a handful of houses in Reims have crayères that you can visit:

For dinner we suggest Le Crypto, in the centre of Reims, a wine aficionado’s restaurant, classic and unpretentious, its menu dependent on the season, its wine list excellent.

It’s a two-hour drive from Champagne to Chablis, a lovely, unassuming town whose honey-coloured houses straddle the fine River Serein.

The ancient capital of Burgundian winemaking, Beaune is blessed with some of the most important medieval architecture in Europe. Its 15th century Hotel-Dieu, with its arched surrounds and extraordinary roof of glazed polychromatic tiles, is the hub of the old town and the venue for the annual Hospices de Beaune auction in November – certainly the most famous charity auction in the world.

Beaune is your base to take in the surrounding vineyards of the Cote d’Or: what follows should give you an idea of the wealth of wine-related excursions on your doorstep. Visit the wineries’ websites for more information – bear in mind you have to book at most domaines.

Hotels in Beaune can be excellent (if old-fashioned, like the popular and very central Le Cep). Otherwise we can recommend L’Hotel and Hotel de La Poste, or Villa Louise. Also note that many of the domaines – such as Dufouleur – have B&Bs.

North of Beaune, in the Auxerrois, is the Abbaye de Reigny, the C12th abbey which is now a luxury hotel.

“Beaujolais is long overdue some affection,” wrote Jamie Goode in Club Oenologique last year. In the article he detailed the ravages that Beaujolais Nouveau (picked too early and vinified into a fruity, insipid concoction, shipped and drunk with indecent haste) visited on the region over the last 25 years – and the revival that is now taking place in “this most seductive of landscapes”, with undulating vineyards and towns with memorable, romantic names: St-Amour, Juliénas, Chénas, Moulin-a-Vent, Fleurie, Chiroubles, Morgon, Régnié, Brouilly. The wines have been transformed in the last decade and now every commune produces crus capable of rivalling and even bettering some of the well-known names of the Cote d’Or.

Above all, relish a drive through some very lovely country, and give some love back to Beaujolais.

Often overlooked, Macon is a rather lovely historic town on the River Saône, with narrow streets and balconied houses, myriad churches and a fine old centre. It’s the capital of the Mâconnais region; the vineyards of the Beaujolais are within easy reach.

Beajolais is quite compact and visitable via one of the many wine routes that wind through the villages.  A popular stop is the windmill on the border of Chénas and Romanèche-Thorins, then it’s worth driving up the Mont Brouilly to Notre Dame Des Raisins for its splendid views over the Saône valley – it’s a particularly wonderful experience at harvest time in the autumn.

A short hop from Burgundy, your tour ends in Lyon with a foodie extravaganza at one of the hundreds of internationally-rated restaurants in what is arguably the gastronomic capital of the world. There are half a dozen first-class hotels in Lyon, but the InterContinental Hôtel-Dieu, but with its 200-foot dome and stunning river frontage, which opened last year in the magnificent 12th-century building that was a maternity hospital for eight centuries, would have to take precedence.

To eat in Lyon presents a problem: you would have to stay a month to do justice to the city’s restaurants. As a start, you might dip into Bill Buford’s recently-published Dirt, an account of the veteran writer and editor’s apprenticeship in some of the great kitchens of Lyon, including six months at La Mère Brazier. It gives one of the best insights into restaurant life since Kitchen Confidential.

Lyon “boasts a galaxy of Michelin-starred restaurants in and around the city, as well as a fine food market, terrific bakeries such as Boulangerie du Palais in the old town, the deservedly renowned chocolate shop Bernachon and a great selection of restaurants specialising in more local cuisine,” the critic Andy Hayler wrote in Club Oenologique in March 2019.

It is of course the home of the legendary Paul Bocuse, but most serious foodies advise that there are many more exciting things going on in Lyon than his signature restaurant.

We asked a group of several hundred international gastronomes – including chefs, critics, hoteliers and restaurant proprietors, “What is the best restaurant in Lyon?” and we were inundated.

Top of the list is the once-great and now-revived La Mère Brazier, considered one of the greatest classical restaurants in the city (“The paté en croute here is a thing of beauty”, Hayler says); then our respondents loved the off-the-radar Neuvième Art, with Meilleur Ouvrier Christophe Roure in the kitchen: “It borders on three stars” said one.

Les Apothicaires is also highly recommended, as is Hugon (“the menu is handwritten and they have all the heavy-duty Lyonnaises classics. Love that place. A dying breed I’m afraid”, one of our respondents said elegiacally) and Substrat, and Takao Takano.

Hugon is one of the best-loved of the famous local bouchons of Lyon. Another is Comptoir Abel,  “probably running since 1726… arguably the best of this style of restaurant,” Hayler says. You might also try Daniel et Denise. 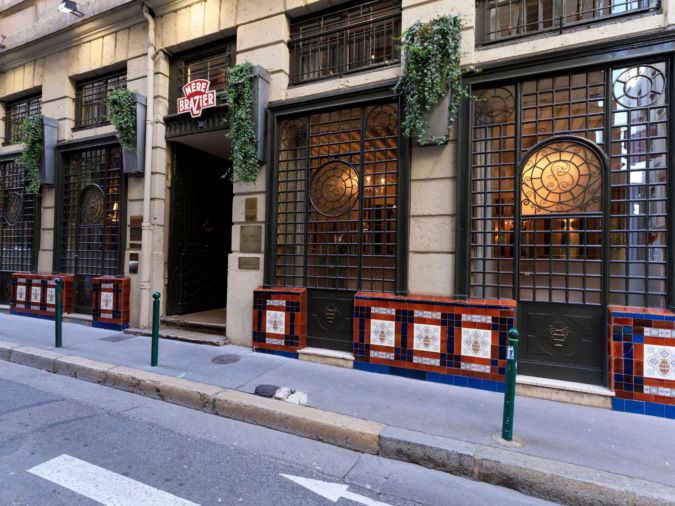 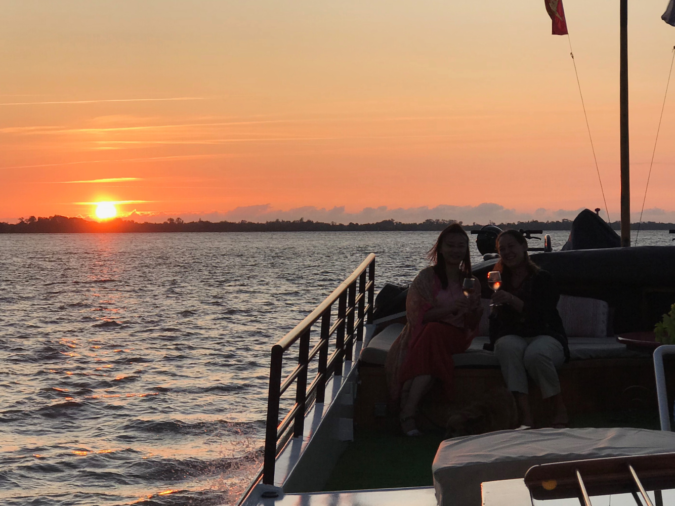 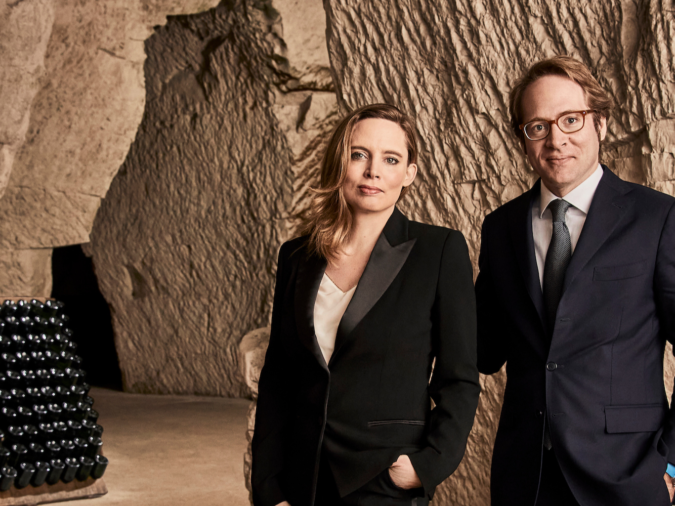