Life could have turned out very differently for Michael Seresin. When the renowned cinematographer was 16 he spent an afternoon at the New Zealand Department of Education’s career-advisory service in Wellington. Seresin was at boarding school outside the city and saw an opportunity both for an urban adventure and to skip class for half a day. The young student dutifully filled out the ten-page form before enjoying a few hours on the streets of the capital and returning to school to wait for – or more likely forgot about – the subsequent counsel.

Three months later, he was summoned back. ‘Most people were told they should be a policeman or whatever,’ the garlanded cinematographer and winery owner says, 60 years on. ‘With me, they had absolutely no idea.’ The only vocation the advisor could come up with was agriculture. ‘I was quite surprised at the time,’ he says. ‘Then again I’d always enjoyed gardening – I had this little vegetable garden at home when I was 8 or 9 and I liked seeing things grow.’

Seresin has seen lots of things grow since. We are sitting in the conservatory of his four-storey house in London’s chichi Maida Vale, home to various children, cats, and a sprawling garden that, given its size, central London postcode, and that career advice – is hard to ignore. ‘I’ve let the whole thing go,’ he says. ‘On purpose. I don’t mow the lawn, I don’t do anything: it’s just all overgrown. It’s filled with bees and butterflies and everything – we’ve even got a fox. It’s wild – but I love it.’

It’s a telling insight – and typical of Seresin’s seemingly default laid-back demeanour, as evidenced over a meandering two-hour chat on a sunny Saturday morning. Dressed casually in t-shirt and jeans, he a young 76-year-old. His dialogue is warm, familiar, and dotted with expletives and indiscreet asides.

It’s a curious predisposition given the precision of Seresin’s day job. He has been an in-demand cinematographer since the mid-1970s when he forged a long-lasting and productive relationship with the director Alan Parker. Seresin’s oeuvre includes such films as Bugsy Malone, Midnight Express and Angela’s Ashes while, more recently, he has become the go-to man for summer blockbusters – notably Harry Potter and the Prisoner of Azkaban, Gravity, and two Planet of the Apes films. Yet despite the fact that his is a highly technical profession, one gets the impression he is, at heart, an instinctive, impulsive individual – a man who appreciates life’s simple pleasures.

Founding Seresin Estate in 1992, long before the Hollywood fad for owning wineries, his Marlborough wine venture wasn’t a vanity project. The enterprise was a slightly romantic, almost naïve notion, a trait that was evident on his arrival in Europe in the mid-1960s. Seresin made the journey from New Zealand to Italy by boat, and on arriving in Rome, immediately headed for the nearest coffee shop. ‘Caffè Roma,’ he says. ‘I still remember it. All I could see was bottles of wine and whisky and gin and aperitivos and digestivi. But everybody’s just having coffee, juice, or a glass of water with lemon. When I was growing up in New Zealand, the liquor laws were strictly controlled and there was a Calvinist approach. Liquor was the root of all evil. But in Italy you could walk into a café, sit down and have a coffee and a croissant, or a glass of wine or whatever. Wine was just part of life.’

Immediately he decided this was the life for him. But after a year absorbing Rome’s neorealism film scene – while not actually working very much – Seresin moved to London (‘a little regretfully, frankly’). He slept on a friend’s floor before getting ‘a horrible flat in Willesden Green for five quid a week’. Within a short space of time, though, it proved a sage move. ‘I did very well very quickly – whether through luck or talent, I don’t know.’ But one thing bothered him. He found the same attitude to alcohol that he had encountered back home. ‘There was a mystery about wine perpetuated by quite a lot of people. It’s still there, in many ways. ‘You’d hear people say “Oh wine – only poofs drink wine.”’

Perhaps pining for Italy’s more enlightened approach, he bought a holiday home in Tuscany and befriended an eccentric Genovese count who would invite him to his rambling farmhouse and serve his own wine. ‘He had five acres and they’d harvest the grapes, crush them in the barn, use a small basket press and age it. We’d go over and have lunch and a bottle of his wine, surrounded by the vines. And I thought it was fucking amazing.’ A similar episode with the family behind the rather grander Badia a Coltibuono (‘we went for lunch, but we didn’t realise they had a castle’) further whetted his appetite, and a starry-eyed Seresin started looking to buy a vineyard blissfully unaware of the challenges vintners face. ‘I didn’t do a business plan: I wouldn’t know how to. I just thought, you buy 10 acres of land, you plant grapes, you look after them, you make the wine and you sell it.’

Even he soon realised, though, that pursuing his dream in Italy without knowledge of the area or the language wasn’t viable; not least with the demise of the Chianti wine region’s fortunes. Several years later, Seresin was in San Francisco, having dinner at Chez Panisse with a friend who told him about a New Zealand wine he’d had. ‘It’s called Cloudy Bay,’ the friend said. ‘You should try it.’ So Seresin, who just so happened to be on his way to his homeland, did. ‘I’m not a huge fan of Sauvignon Blanc,’ he says. ‘But I liked this.’ Within a few months, he had bought 68 hectares in Marlborough, two of which he planted to Cabernet. ‘That’s how stupid I was,’ he says. Two years later, he planted Pinot Noir.

Seresin has never claimed to be a wine expert – ‘it allows me to ask stupid questions’ – but as the saying goes, he knows what he likes. Or rather what he wants. Often, this has followed an alternative, non-conformist approach: so he majored on Pinot Noir, not Sauvignon Blanc; his Sauvignon was – and still is – laced with Semillon and partially barrel-fermented; and within a year, he had gone organic. It was, he admits, a purely idealistic decision, based on a smattering of research in Tuscany and an instinctive aversion to chemicals. ‘I literally phoned up one night and told the manager, who in those days was also the winemaker and the viticulturist, “We’re going organic.” He wasn’t too happy about it – but I’d seen the spray calendar on the wall: January 1st, spray with this; January 15th, spray with that; January 22nd, whatever. If you spent 50 grand a year with the agrochemical companies, you got a free fridge.’ The estate manager left shortly afterwards.

These days, Seresin is not just organic, but biodynamic, and one of only two New Zealand estates (along with Millton Vineyards) accepted into Nicolas Joly’s La Renaissance des Appellations group of terroir-driven, organic producers. It is, according to sustainable wine expert Monty Waldin, one of the finest examples of a large-scale biodynamic winery (producing around 700,000 bottles a year). Such a commitment is no small undertaking. So why do it? ‘I once asked Anne-Claude Leflaive the same,’ Seresin replies. ‘She just said “If you can grow grapes and make wine without chemicals, why not?”’

Seresin’s 80-hectare estate is akin to an Old World farm – something that you feel probably delights the Europhile Seresin. It currently boasts 1500 olive trees, vegetable gardens, 50 sheep, several dozen chickens and a handful of cows and goats, ‘all of which feed into the organic and biodynamic culture.’ Seresin is not evangelical about the practice, saying merely he feels ‘if the soil is treated with respect, it will both act and react accordingly. And,’ he adds, ‘you get a very different quality of person working for you when you’re organic.’

Which brings us to his recent appointment of former Yealands winemaker Tamra Kelly-Washington. What made him pick her? ‘Firstly, I don’t have to deal with testosterone. She actually started her career with us, then went off and learned the mechanics of it. She’s worked outside New Zealand; she’s quite urbane, quite sophisticated. And she’s got a work ethos from her time in Italy, where they’re farmers, not 9-to-5 winemakers.’

That work ethic and immersion in the vineyard is important to Seresin. When he was considering candidates, he was wary of winemakers with an impressive degree who would sit in an office analysing pH levels. ‘You know how a farm dog gets up of a morning, sniffs around, checks where the wind’s coming from, where the other dogs are before it takes its first pee? That’s what I need – people who have an intuitive, instinctive understanding. And that’s harder to find in the New World.’ More than anything, though, he adds, ‘I really like her as a person.’

Which is more than he can say about Kelly-Washington’s former employer, whose sustainable credentials he pillories (‘an industrial grape grower’ is one of his more generous depictions of Peter Yealands). The ‘industrial’ approach is anathema to Seresin. It’s part of the reason he recently sold the Renwick-based winery building to a consortium led by two young winemakers. ‘It was getting too big. It’s a 1,300-tonne winery, we were using about a third of it, and it was a pain in the arse – the joy had gone out of it.’ Seresin has retained a contract to make wine there, and the new owners will use it as a hub for a clutch of different producers to make small parcels of wine.

He also sold the original ‘Noa’ vineyard, next to the winery, and plans instead to focus on a sizeable single vineyard, Raupo Creek. On the north-facing slopes of Marlborough’s Omaka Valley, Seresin’s vines currently carpet 53 hectares of the Raupo Creek estate, which has already proven its premium Pinot Noir credentials. ‘It’s less staff, less worries, less of everything – and at this point in my life, I just want to get joy out of it. It’s like that philosopher said: small is beautiful.’

An interview with adland knight and winemaker Sir John Hegarty 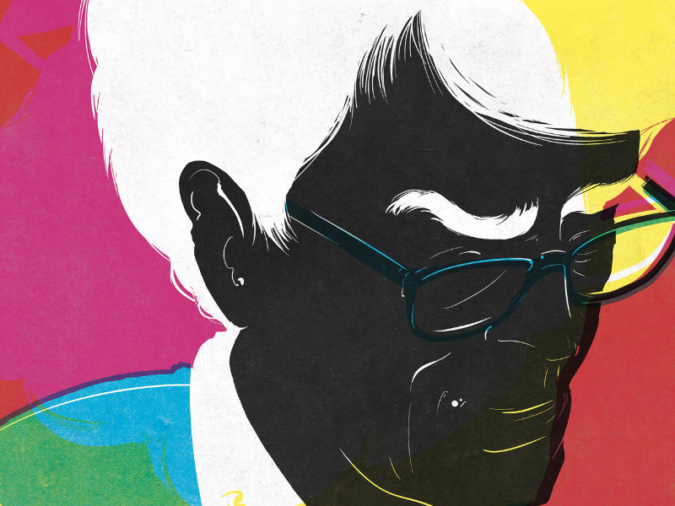