The Baccarat Bar had been due to open in Harrods in April. That didn’t happen, for obvious reasons. When it did finally open its doors in July, it didn’t stay open for long – for less obvious, and rather more embarrassing reasons: Harrods, it turned out, had, amid the maelstrom of the pandemic, neglected to apply for the necessary alcohol licence.

The bar finally re-opened in late September, and Club O was able to squeeze in a visit before the second lockdown hit London and the rest of the UK this week. So it was mask on, into the separate, roped-off entrance and down an extravagantly decorated staircase to a discreet space adjacent to the suitably elevated Louis XIII room (complete with conspicuous display of £75,000 methusalah, natch) next to the store’s wines, spirits and cigar rooms.

The bar has been 18 months in the planning, and there was more than a degree of intrigue on the London bartending scene once word of its ambition and aesthetic emerged. The presence of Cameron Attfield behind the bar only intensified interest. Attfield perfected his trade under Ryan Chetiyawardana at the Mondrian Hotel’s Dandelyan, top of the 2018 World’s 50 Best Bars list, before moving to head up disruptive Soho hangout Disrepute. Last year, the Londoner claimed the title of World Class GB Bartender of the Year, going on to represent the UK at the world finals. It was Attfield’s approach to both contests that stirred intrigue: he showcased an array of flavour manipulation and extraction techniques in a series of innovative concoctions. (His whisky on the rocks was served inside an isomalt sphere; when judges cracked the sphere open with a spoon, it released a cloud of strawberry vapour.)

More of the same was promised at the Baccarat Bar, and we weren’t disappointed. Under the title ‘Refraction and Emotion’, the cocktail list spans 20 offerings, from £18-£28 (including four non-alcoholic options), all served in glassware from the Parisian crystallerie. The idea, apparently, is to focus on light’s interaction with the drinks in the glass to produce a rainbow refraction. To that end, the list is split into eight sections – each with two cocktails representing a different colour, and each paired with a glass that reflects its core flavour, with this glass style, flavour profile and colour spectrum illustrated on the menu. For further colour – or confusion – artworks from students of London’s Royal College of Art represent the emotions or qualities associated with that colour. It is, to say the least, a lot to digest for anyone simply wanting a drink.

The descriptions and depictions of those drinks don’t make deciphering this concept any easier. The Push The Button cocktail is made with Dalmore cigar malt whisky, forced rhubarb switch, Japanese knotweed, birch sap and cacao husk, we are told. The associated emotion this apparently conveys is power, or rather ‘The capacity to act with purpose, wielding power to achieve the ultimate goal, from the sheer natural strength of the Japanese Knotweed to the manipulative powers of force growing and extraction.’ If anyone can explain what this means, I’m all ears.

Fortunately, my wife has a way of distilling things down to the bare essentials, which in this case came via the conspicuous illustration of the glasses next to each drink’s listing (the stemware is, naturally, all available for purchase). This made her choice a lot easier, since she picks her cocktails primarily according to the shape of glass they are served in, rather than the drink they contain. This, to me, is like backing a horse according to the jockey’s outfit – but given this is an approach she also endorses, and with more success than my policy of studying the horse’s form, who am I to argue?

Certainly when the glasses are as ornate as they are here, and cost as much as £265 each, she’s probably right to prioritise this factor. With that in mind, I went with the £265 Mille Nuits Flutissimo Red, specified as the vessel for my first cocktail – The Arrival, which seemed as good a place as any to start. Not least because it demonstrated Attfield’s remarkable creativity, which in this case, we were told, involved four different treatments of that core cocktail constituent – the pea. Having already done my best to absorb the extensive and diverse elements of the menu, I kind of lost concentration at this stage, but I *think* these spanned: peas fermented in water, Champagne yeast and agave for eight days to yield a bitter, grassy note; cold-pressing and clarifying a sugar-snap pea with agar-agar (a by-product of seaweed) for sweetness; blitzing and homogenising peas via ultrasonic waves, and distilling the solution in a rotary evaporator (no, me neither) for earthiness; and an extraction, using a technique common in perfumery, to release essential oils from elements that are too delicate to cook. Hendricks Gin and rice oil does the rest.

It’s not something I’m likely to fashion at home, but then again I don’t expect – or want – a £25 cocktail to be something I could knock up in my kitchen. And, I have to say, ridiculous as it might sound, it tastes absolutely delicious – zingy and salivating in a strikingly original way. It was also a fine match for the impossibly delicate Faroe Island smoked salmon with horseradish cream cheese that was recommended (all the bar snacks are prepared by Harrods’ in-house chefs, including the truffle and parmesan fries, which are almost so good as to be worth the £7.50 price tag).

Harrods needs to earn its investment back somehow, of course. And a modified, socially distanced capacity of 23 guests per seating – more than halved from the original plans – hasn’t made this task any easier. The interiors of the bar, modelled on the Maison Baccarat in Paris, and featuring faceted walls and crystalline motifs obtained by the fusion of clear crystal with 24-kt gold, will also elevate the bill.

No expense has been spared behind the scenes either. The bar encompasses a lab, complete with equipment that calls to mind the era of molecular gastronomy – those rotary evaporators and centrifuges. The idea is to reduce boiling points of liquids, infuse and extract flavours without compromising their taste, and redistill spirits in a vacuum chamber. It will also allow for the ‘batching’ of modified spirits and concoctions, so customers won’t have to wait the eight days of the pea fermentation for their drinks to be served.

Among the other innovative techniques harnessed is switching – freezing a spirit to separate the pure alcohol from the water. Once strained and separated, the water is replaced by another ingredient (Attfield is a fan of clarified red apple), lending a new flavour to the spirit without compromising its ABV and structure. Then there’s ultrasonic homogenisation – using ultrasonic waves to pull apart flavours and combine them with others for a more balanced product. In a Negroni, this means infusing gin, Campari and sweet vermouth in a bag within an ultrasonic bath – the same type as is used to clean jewellery – breaking down each component’s molecules and allowing the three elements to essentially become one.

On the one hand, such involved preparation seems faintly ridiculous; on the other, it’s hugely inventive – and yields compelling results. Either way, it all makes the average gin and tonic seem rather pedestrian…

How it feels to open a London restaurant in 2020 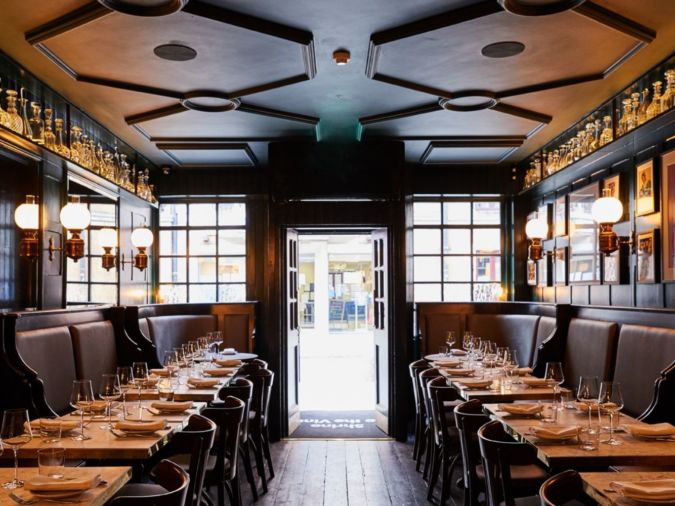 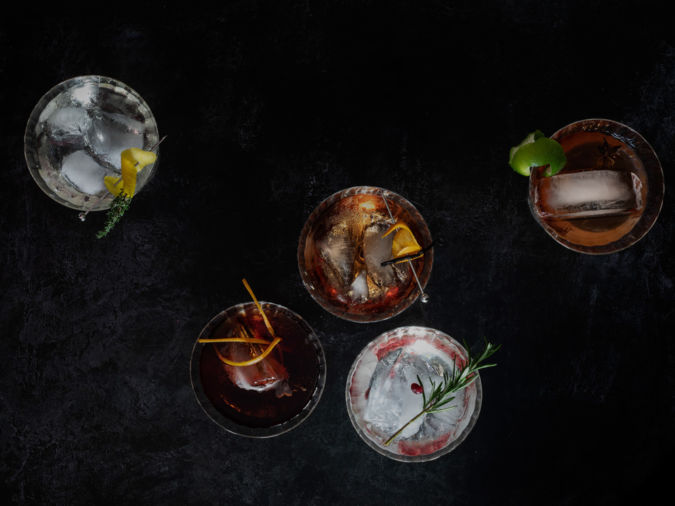