Many a winemaker could claim to sense a strong connection to the plants that power their product, but you can really feel the ties between family and vine when speaking to the makers of Piero Busso wines. Old vines embody the very identity of this artisan Barbaresco winery.

‘It all started with my grandfather,’ says second-generation winemaker Pierguido Busso. ‘Right after the war, he bought what’s now our historical vineyard, Vigna Borgese. That’s the vineyard that gave us our first-ever Barbaresco in 1982.’ That first vintage was a long time coming. Shortly after he purchased his plot in 1948, a ‘stupid incident’ caused the tragic and premature death of Pierguido’s grandfather, Guido Busso. ‘A cut caused him to develop tetanus, which at the time was lethal. He was gone in a week,’ says Busso. Guido left behind his wife Ada, three children, that new plot of vines and his winemaking dreams.

Ada never ceased taking care of the vines – even when, later in life, her children left Piedmont’s rural Langhe region in search of a more modern existence. But back then, it was impossible to make the plot into a commercial project while raising a family – most of the fruit was sold to neighbours and she only occasionally kept part of the crop for personal use. ‘She took care of the vineyard herself in the name of her love for my grandfather,’ says Busso.

It wasn’t until the 1970s that Ada’s son Piero accepted his mother’s calls to give a life in winemaking a chance. Giving up a potentially lucrative career as a vet, he set out on expanding the family’s land in the Langhe, and eventually bottled his first vintage in 1982. ‘My father Piero wanted to resume the winemaking project that my grandfather had started almost 30 years earlier,’ says Busso. ‘He isn’t a very extroverted man, so he never told me, but I think it was just a very natural thing to do, coming straight from his heart.’

Over four decades later, Piero turned Guido’s dream of a thriving, family-run winery into a reality, managed alongside his wife Lucia, daughter Emanuela, and son Pierguido. A total of about 10ha of vines, mostly Dolcetto, Barbera, and Nebbiolo, are responsible for Piero Busso’s classic Langhe wines, including Dolcetto and Barbera D’Alba, and a range of Barbarescos whose old vine interpretations – made from small plots in Gallina and Albesani vineyards – are the family’s pride.

Despite the plants being well over 30 years old by the time the first wine was launched, the age of the vines was never Piero’s focus. Yet, when he entered the family business in 2004, Piero’s son Pierguido swiftly realised the tremendously deep historical, viticultural, and emotional value those old vines encapsulated. Guido’s post-war winemaking dreams, Ada’s perseverance throughout decades of struggles, Piero’s dedication and winemaking vision: according to Pierguido, those vines defined the Busso family identity.

In 2010, he released the estate’s first old-vine Barbaresco Albesani (‘a novelty that says much of my heritage’), and five years later he added a further old-vine Barbaresco to his portfolio, with fruit sourced from a Gallina vineyard site planted in 1953. ‘Old vine Barbaresco is less approachable in youth yet more profound and intense than the classic expressions. Their colour is also a little deeper, and the nose is more floral, with a characteristic brackish note and tones of morello cherry,’ says Busso.

While looking back at his family’s history, he also integrated traditional vineyard and winemaking techniques into his approach, including the cappello sommerso, or submerged cap, ‘a very popular practice in the 80s that was largely abandoned to the benefit of new techniques.’ It involves keeping the cap constantly submerged in the must during the alcoholic fermentation. The uninterrupted interaction between solids and liquid allows for a gradual extraction of phenols and aromas and can lead to a wine with rounder tannins and a more stable colour.

‘Old vine fruit has a more robust structure, which demands a longer, more delicate extraction,’ Busso explains, ‘so we normally leave old vine solids in the must for twice as long as our classic Barbarescos. In 2016 (a perfect vintage), our old vines did 80 days of cappello sommerso, while the others did 50.’

In the vineyard, the Bussos adopt a low-intervention approach, allowing the vines to express their own impulses as much as possible, and trimming the grass just once or twice per season. ‘The past generations thought that too much grass meant you were neglecting the vineyard, while it actually means that there is diversity instead,’ says Busso. ‘We also adopt a minimal approach to canopy management. We don’t follow a premeditated schedule, everything is based on the vineyard’s specific needs. I harvest later, once phenols and tannins are ripe. If I used the schedule of the past I would need to harvest in August.’

Not only do older vines result in long-lived Barbarescos with greater depth and flavour intensity, they’re significantly easier to manage and their resilience allows them to better withstand the changing climate’s capricious nature. ‘With an old vine, you’re much more likely to get to full maturity even with extreme climatic conditions,’ says Busso. ‘Those are the least demanding of all my vines. In younger vines, roots are very spread out, which means more energy intake, thus more growth. But older ones aren’t as vigorous so don’t require much human intervention. They’re plants with great inner harmony.’

Busso’s fascination with old vines is a life-long endeavour: he is now firmly committed to championing old vine growing, even if it’s a more drawn-out process for the estate. ‘Old vines make Barbarescos that need a little time to come together. One can’t rush them, so we release them after six years,’ he says. ‘But these wines are also more profound, elegant yet intensely concentrated, and that’s an added value that we have a duty to uphold.’ 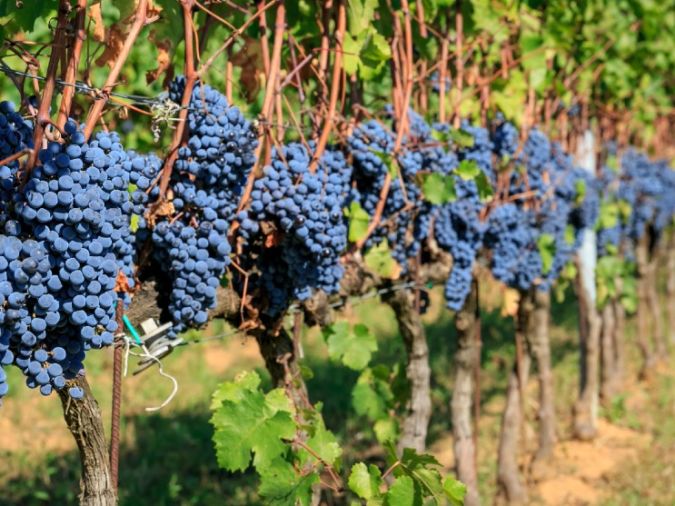