For Chateau Musar, obstacles and challenges are nothing new. And while the world has been coping with coronavirus, Lebanon is dealing with the worst economic crisis in its history.

With an estimated 6m people now living below the poverty line, it’s no surprise that many Lebanese are suggesting the pandemic, while undoubtedly serious, isn’t anything to compared to the turmoil of the political and economic situation.

“We’re used to adversity,” Marc Hochar says. Hochar represents the third generation to take charge of the great Lebanese winery Chateau Musar, whose seductive red blends and ageless whites have captivated wine lovers for decades. After a career in finance he was persuaded to join Musar in 2010 alongside his cousin Ralph and his brother Gaston, who has been running the winery since the 1990s.

Speaking by Zoom link from Munich (he has never lived in Lebanon) Hochar says the current situation is on a new level of seriousness, but the country has been rocked by crisis before. “Since the birth of the country, going back thousands of years, it’s had issues on and off. This one is different of course, but we’re used to it.”

Lebanese wineries have often suffered from the volatility of this beautiful, complex country’s politics. In 1989, at the end of the civil war, the Hochar family home and winery suffered a direct hit from shelling. In 2006 the Bekaa Valley – where almost all the vineyards are found – was heavily bombed by Israel, which saw the valley as a conduit for arms smuggling by the militant Islamist group Hezbollah. A ceasefire was brokered just days before harvest.

Then, in October last year, the country was paralysed in an ongoing revolt against a weak government, ailing services and economic collapse. The streets of Beirut and Tripoli were filled with hundreds of thousands of demonstrators, banks were torched and pitched battles fought with police.

According to the BBC, Lebanon’s currency has lost nearly 60% of its value against the dollar, which in a country that relies on imports has led to rampant inflation. Thousands of businesses face failure; two weeks ago the government applied to the International Monetary Fund for a multi-billion-dollar bailout.

Against this background, the challenges in getting wine out of the country might seem trivial, but many of Lebanon’s 50-odd wineries rely heavily on exports – just under half of the country’s 8m-bottle production is exported.

Musar has by far the highest international profile of Lebanon’s wineries. Despite the fact that the winery, outside Beirut, has cellars festooned in nearly a century’s worth of blackened cobwebs, it is a modern, international operation, with offices in several cities worldwide and 80 per cent of its production exported. The UK is its major market.

But for all its modernity, Musar is still a Lebanese winery. “We’re dealing with the same issues: the weather, the terroir and the volatility of Lebanese politics,” Hochar says.

Sitting in his glass-walled office, he gives an impression of businesslike level-headedness, one of the characteristics perhaps not associated with his mercurial and famously charismatic father, Serge, who died in 2014. “He was a hard act to follow – big shoes to fill,” the son says. But a cool head is what’s needed in the current situation, and Hochar is determined not to suggest that Lebanon’s crisis is unique.

“There are always circumstances that bring you back to the reality of Lebanon and the issues we face, and there will always be new issues. When the revolution started in October all business activity in Lebanon went down. Imports all but stopped so there were far fewer ships coming in. The roads were blocked, shipping to London and the US was more difficult and delayed. Can you work around these problems? Yes – you just have to wait a couple of weeks until the roads are open again.”

Hochar insists that at heart Lebanon really is no different. Every wine region has different obstacles to overcome. “Every generation has to take its own difficult steps.”

He tries to think of an example of something that might point to Lebanon’s uniquenes. “In Lebanon we have stuffed vine leaves with rice. Well, Grenache has very smooth leaves which are ideal for this dish, and we have a problem with people stealing them. This is an issue as the leaves are very important for protecting the grapes from the sun, so now we’re having to put up fences. There are always new issues to deal with, you see.”

To read an excerpt featuring a year-by-year snapshot of how Chateau Musar managed to continue to make wine during the country’s civil war, click here. 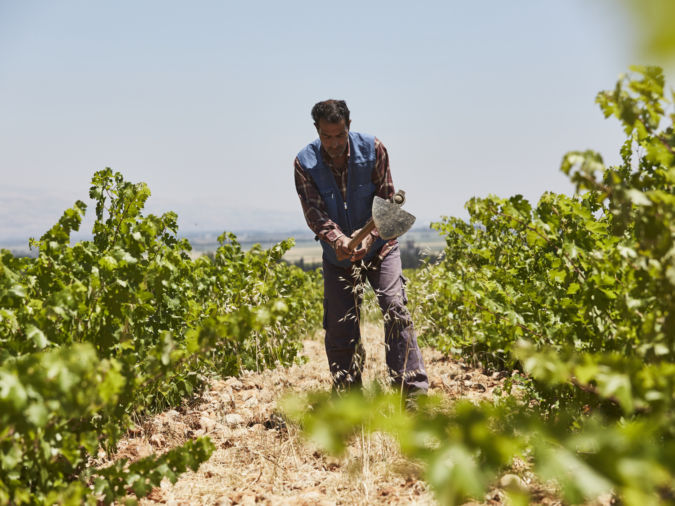