As California’s wine tasting rooms close their doors it’s almost impossible to imagine one of the most famous wine routes in the world bereft of its slow, constant traffic. But it’s true – today, the St Helena Highway is quiet. Wine lovers and tourists can no longer decant from limousines into cool dim tasting rooms. From Coombsville to Calistoga Napa’s renowned wineries have no visitors.

Club Oenologique was in the fortunate position of being in the Napa Valley just before California Governor Gavin Newsom (himself part owner of Cade Winery on Howell Mountain) announced the shutdown. I dropped into the fine old Beaulieu Vineyard winery just outside St Helena at the invitation of winemaker Trevor Durling, who had offered to open some of the winery’s old library bottles.

(Main pic, top, surveying the BV#2 vineyard in 1939. Georges de Latour is on the right of the group standing on the tailgate of the car)

“Few wineries have played as critical a role in the history of American wine”, Kelli White says of Beaulieu Vineyard in her magisterial book Napa Valley Then & Now. “BV is owed extra recognition for bringing André Tchelistcheff to Napa,” she adds.

Indeed, the chain-smoking Russian emigré, whom BV founder Georges de Latour met in Paris and persuaded to come to Napa in 1938, casts a huge shadow over the valley. He is credited with single-handedly reviving its wine industry after the ravages of Prohibition. At BV he introduced cleanliness in the winery – as well as pioneering cold fermentation and malolactic fermentation; he reduced the use of sulphur dioxide and started using small oak barrels for ageing (these were still primarily American oak until the 1990s). Future giants of Napa – men like Joe Heitz, Louis Martini and Robert Mondavi – considered him a mentor. He (probably) coined the term “Rutherford dust”.

Tchelistcheff’s legacy “lives on today,” Durling says. “I certainly feel his presence in the winery, and this relates to everything from the physical spaces within the cellar that he thoughtfully designed all the way through to our winemaking philosophy in crafting world class wines of distinction.”

Tchelistcheff had some of the finest raw material in Napa to work with – the fine slope known as the Rutherford Bench that rises to the Mayacamas range on the west side of Napa Valley, between St Helena and Oakville. Rutherford is one of America’s most feted appellations, home to Inglenook and Grgich Hills, Far Niente, Martha’s Vineyard and Bella Oaks among other great names. The sandy, loamy soils of this three-mile-wide stretch produce unique texture and flavour in its wines: an elusive sensation of ultra-dark chocolate and tang of iron that aficionadoes refer to as Rutherford dust. I’m about to see exactly what the dust looks like as it ages.

By the 1960s Tchelitscheff’s BV Cabernet Sauvignon – most famously the Georges de Latour Private Reserve, which he created in 1938 – were world-renowned. The Georges 1947 is the most famous of all (“incredible youth and power”, White says), but the 1960s produced some legendary wines.

And it’s that decade that Durling drew on at the winery last week. It’s hard to express what an experience it is to taste really old Napa. Wines from the 90s aren’t that common, the 80s even less so, and if you want to go back to the 70s and 60s and beyond, you have to know where to look and whom to ask. One of the very finest Napa wines I’ve had is a Rutherford Pinot Noir, the 1951, from Inglenook. It remains a benchmark of excellence; these sprightly 50-year-olds now stand alongside it.

The most striking thing about the wines was how incredibly viable they were – bright, vibrant, dusty sweet tannins washed with juice – these are wines for the table, not for a tasting room. I was particularly taken with the 1985 in magnum which I’d had out of bottle last year when I it found seriously evolved. The magnum, by comparison, was fresh, a wonderful bright ruby hue, the palate still with hints of primary cassis.

There was one outlier too: we tasted the 1968 “Special Burgundy” Napa Gamay (Valdiguié or or Gros Auxerrois as it’s known in its native Languedoc). A splendid wine.

And these wines are alive. Durling had to bring up another bottle of the 67 and opened it before the sediment had settled (it had been lying on its side for half a century). A blackish-purple aromatic gunk escaped as the cork was drawn and stained his hands like henna. It gave the impression of a bottle that is changing and evolving as it sleeps. But once open, the end comes quick. We pulled the corks at the table and poured the wine – and after 10 minutes (sometimes less) the older wines began to wilt and flag, the fruit evaporating, the tannins tightening.

This was a fascinating snapshot of older Napa wines made by a master winemaker. These vintages are hardly ever seen in their hometown, let alone in Europe. Above all they demonstrate clearly that the greatest Napa wines – then as now – are elegant and balanced and the best of them are capable of half a century of ageing.

An urban winery and ‘society’ in Los Angeles 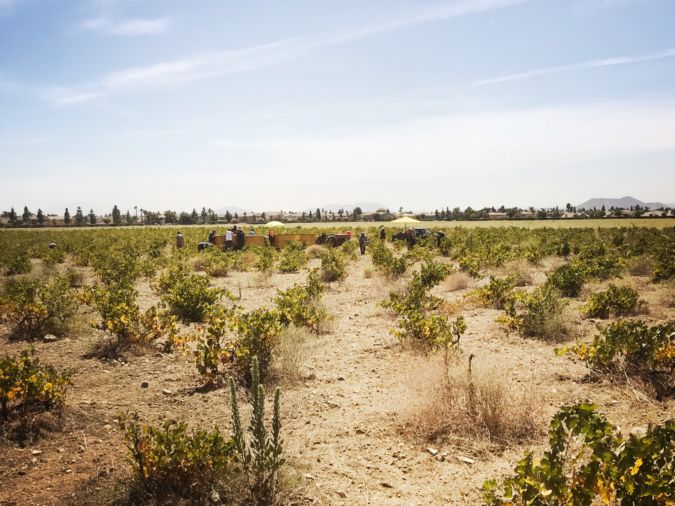