As in life, so in wine. That age-old mystery – nature or nurture – is among the many existential quandaries that the grape throws up. Take Bordeaux. The 1855 classification has remained all but unchanged since its inception, suggesting that the natural lie of the land trumps any impact by human hand. Yet winemakers such as Denis Dubourdieu and Stéphane Derenoncourt are feted for their work in the region – so which of the qualities is the more integral?

In the case of South Africa, the question is particularly thorny. It is, after all, one of wine’s many anomalies that South Africa is categorised as part of the New World when, in reality, it is very old wine country indeed. (Jan van Riebeeck, the Cape’s first commander under the Dutch East India Company, pressed the first wine grapes on the Cape in 1659.) Yet despite such an impressive history, only a handful of South African estates have produced wine for three or more generations.

Kanonkop, in the Simonsberg region of Stellenbosch, stands as a beacon among them. The estate was founded in 1929 – although the first wine bearing the iconic label did not debut until 1973. In the near half-century since, it has become internationally renowned. And the reason for its pre-eminence sits firmly with its people, notably the founder, Paul Sauer. Here at least, nurture trumps nature, it seems.

Sauer’s grandson Paul Krige, who today runs the estate with his older brother, Johann, picks up the story. ‘Not only did my grandfather establish the vineyards on Kanonkop and oversee the estate’s foray into winemaking, but as a member of the South African parliament for over 40 years, he went to great lengths to promote the country’s wine industry and to help establish a wine culture here.’ The name Paul Sauer, he maintains, is ‘still recognised as one of the leading figures in the South African wine industry, and every generation that follows him is undoubtedly influenced by that name’.

Sauer was the son of another politician, JW Sauer, who served in the parliament of the Cape Colony, as well as raising fruit and wine grapes on the Uitkyk farm, which sits directly above Kanonkop and is now a wine estate. After his death, Uitkyk was sold by JW’s widow Mary, and an unfarmed spread of land on the lower slopes of Simonsberg was left to her only son, Paul. The young Sauer named this 125ha farm Kanonkop – ‘cannon hillock’ in Afrikaans, referring to the butte above the farm where in the 18th and 19th century a cannon had been mounted. (It was never fired in anger. Instead, when a ship moored at Table Bay some 30 miles away, the cannon boomed to inform local farmers of the vessel’s presence; those wishing to trade wine, fruit, vegetables and tobacco with the ship’s crew would set off to Cape Town to do so.) Sauer owned Kanonkop until his death in 1976, when the farm was passed on to his daughter Mary. Current owners Paul and Johann Krige are the sons of Mary and her husband Jannie Krige.

When Paul Krige came to work on the farm in 1984, it was very far from being the leading light of the South African wine industry that it is today. His mother was having sleepless nights about its future, he remembers. ‘We were still delivering 80% of our wine in bulk to Stellenbosch Farmers Winery [SFW], the large local co-op. That just about allowed the farm to keep its head above water.’

Its position today is largely down to human intervention – in this case, in the form of Paul’s older brother, Johann. The law graduate called a meeting with his parents, his brother and Kanonkop’s then winemaker Beyers Truter. ‘I wasn’t working at Kanonkop yet, but I told my parents and my brother that if the business was going to survive and grow, we needed focus,’ Johann recalls. He also observed that the plantings – only a fifth of which went into the estate label – were ‘all over the place. The farm was planted to Pinotage, Cabernet Sauvignon, Riesling, Clairette Blanche, Sauvignon Blanc, Pinot Noir… We were trying to be everything to everybody.’

Seeing that Simonsberg was particularly suited to Pinotage and Cabernet Sauvignon, Johann set about persuading the family that it should radically alter the business model. It was, he says, ‘not an easy argument to get across’, with the family having to cut the umbilical cord with SFW, which was still buying almost all its annual production. (The relationship with SFW dated back to the 1950s, when Paul Sauer, the paterfamilias, sat on the company’s board of directors.) The Krige brothers were driven by the belief that the interests of Kanonkop and the family should come before the long-standing relationship with SFW, but only if the business principles behind any decisions were commercially sound. They were, and the ties were severed.

Today, Johann says that he considers everyone on the estate to be family. The sentiment embodies an innate contradiction – but a welcome one. In one sense, there is no difference between Kanonkop and any wellrun business: the fact that it is family-owned is incidental. On the other hand, there is a flatness to the organisation that means decisions can be made quickly and efficiently. ‘There’s no formal structure. You manage how you do your job,’ says winemaker Abrie Beeslaar.

Such informality is evident in many forms. Johann Krige is often to be found at the estate barefoot. Apart from required financial discussions every six months, meetings are few and far between – as evidenced by another tale told by Beeslaar. Shortly after joining Kanonkop in 2002, the winemaker suggested to the brothers that the wine made from a vineyard block planted in 1953 was too good to use simply as a component of the standard Kanonkop Pinotage. He recommended grapes from the special block be kept apart, with the possibility of making a new Kanonkop wine – something that had not been done since 1985, with the release of the entry-level Kadette. As Kanonkop’s cornerstone, any decision regarding Pinotage was a significant one. It was, though, says Beeslaar, also a very quick one, made in a corridor. (History doesn’t record whether Krige was barefoot at the time.) ‘They trusted me and gave me their full support, which resulted in the birth of the Kanonkop Black Label Pinotage,’ he recalls.

Kanonkop may be run informally, but there is no doubt that Johann has a ferocious business brain – and that he is in charge. ‘Johann is the business leader. He ensures the books balance and that Kanonkop can continue growing commercially,’ says Paul Krige, whose roles spans marketing and personnel management. Sitting around a table with Johann, marketing director Deidre Taylor, and Beeslaar, I ask who is the dominant personality. Two pairs of eyes and two thumbs point without hesitation at the boss, who looks quietly pleased at this uncomplicated and affectionate demonstration of respect.

Affection aside, Johann does not give the impression he is a man to be trifled with. He talks at length about the importance of family, but he is impatient with any questions about succession. ‘I don’t know anything about succession,’ he says. ‘You don’t get a job at Kanonkop just because you’re a member of the family. No family member is going to walk in and think they own the show. It’s a business.’

He clarifies this later: it’s the idea of entitlement that bothers him, and he makes a pointed comparison between the new and old worlds. ‘The difference between a European business and a South African one is that in Europe you may get family members being promoted because they are family members. So you have the old story: the first generation makes the money, the second generation spends it, and the third blows it.’

Kanonkop is now into its fifth generation: Johann’s daughters Helene, 35, and Marcia, 31, and Paul’s son Sauer, 27, and daughter Suzaan, 25, are waiting in the wings. Helene and Marcia are raising young children. Sauer, a Bachelor of Commerce graduate, works independently in agricultural services, while Suzaan is studying for a BSc in oenology and viticulture at Stellenbosch University. Their fathers, though, are adamant that succession is not a right but a privilege. Bearing the Krige name is not a passport to a job.

‘If there is a job going at Kanonkop, the best person gets it – whether he or she is in the family or not,’ says Johann. ‘As far as succession goes, we’ll cross that bridge when we get there and see which of the new generation are waiting on the other side.’ 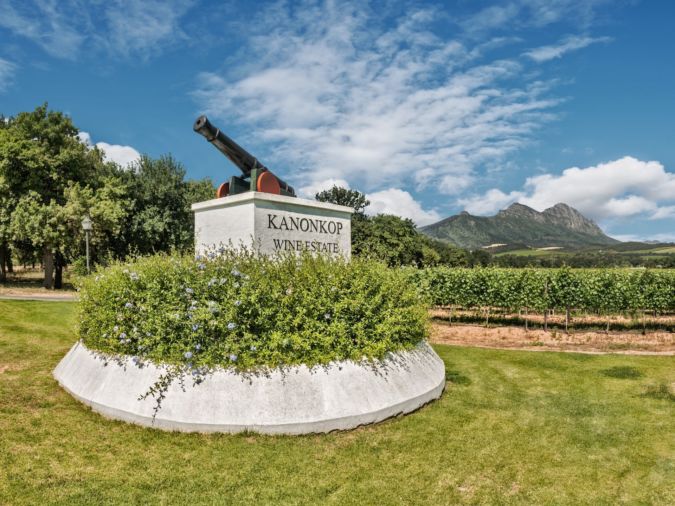