‘Spaghetti,’ proclaimed the notice in the window of the gleaming new Spaghetti House on Goodge Street – ‘but not on toast!’

It was 1955, and a few rays of Mediterranean sunshine were starting to penetrate London’s postwar gloom: the previous year had seen the end of rationing and the publication of Elizabeth David’s Italian Food. By the time the Swinging Sixties kicked in, London boasted a gaggle of more-or-less authentic trattorias, fuelled by the success of Soho’s La Terrazza, where owners Mario Cassandro and Franco Lagattolla hosted a high-profile clientele of film stars and models.

But when a fresh-faced Giorgio Locatelli arrived in London in the mid-1980s, many trattorias were on their last legs, including the one in Surrey where he had his first job. ‘The pasta was dry, they had pollo sorpresa [a pseudo-Italian version of chicken Kiev] on the menu, and I couldn’t believe how substandard everything was,’ he recalls. Like any chef wanting to earn his culinary spurs, Locatelli worked his way through several French kitchens – first at The Savoy, under Anton Edelmann, then moving to Paris in 1990 for posts at the hallowed La Tour d’Argent and Laurent. As an Italian who had been taught cookery by les rosbifs, he came in for plenty of abuse.

Returning to London in the early 1990s, and determined never to deep-fry another pomme soufflé, Locatelli took a job as head chef at Olivo, Mauro Sanna’s Belgravia restaurant. ‘It wasn’t my own place, but at least I could write the menu.’ Five years later, he opened Zafferano, in Knightsbridge, where he presented a classical four-course menu with reworked dishes from all over Italy (not just his native Lombardy), gently subverting it with the occasional French technique – purées, for instance. ‘In Italy, these are things you do only for kids.’

Zafferano was a huge success, earning a clutch of awards, a loyal clientele and, in 1999, a Michelin star. ‘What was really important at Zafferano was the quality of the ingredients,’ Locatelli tells me. ‘Back in the 1960s, when Mario at La Terrazza wanted veraci [tiny clams, no bigger than a thumbnail] for his spaghetti alle vongole, he had to bring them back from Naples on Alitalia. They were expensive, of course, but he loved that dish and was convinced people would pay for them.

‘But when I opened Zafferano, suppliers started turning up with beautiful produce: gamberi rossi [red prawns] from Sicily or Sanremo, fresh borlotti beans, bottarga that was much better than I ever found in Lombardy. Europe had opened up, and there were young Italians who were proud of their produce.’ Wine merchants had more to offer than wicker-bottomed fiaschi of Chianti, too: Locatelli’s list at Zafferano, like Sanna’s at Olivo, was completely Italian.

Locatelli left Zafferano in 2002 to open, with his wife Plaxy, Locanda Locatelli, in the five-star Hyatt Churchill hotel on Portman Square. Despite Zafferano’s success and Locatelli’s burgeoning reputation as a chef and restaurateur, the hotel’s owners were still a little nervous about their new high-end restaurant. ‘They flew over from Chicago to look over the contract. The convention was that a five-star hotel should have a French restaurant. We had to convince them that an Italian restaurant could have standards that were just as high’ – in other words, that Italian food wasn’t just about pizza, pasta, gelato and espresso: it could hold its own with the best that French cuisine had to offer.

In Italy, a locanda is a simple, rustic inn; Locanda Locatelli, however, is as much a locanda as the River Café is a greasy spoon. With its cream leather banquettes, gossamer drapes and striking fish-eye mirrors, the Marylebone fixture oozes luxury and conviviality. The kitchen is just as impressive. Fed up with working in subterranean shoeboxes, Locatelli had promised himself a spacious, ground-floor kitchen, ‘and I was very pleased to find out that the kitchen is actually one square metre bigger than the dining room.’ The restaurant earned a Michelin star in 2003 and has held it ever since.

What, then, does the chef make of the numerous pizza and pasta joints that now populate the UK’s high streets? Locatelli is sanguine. ‘I know they upset some Italians, but they’ve never bothered me. I always thought it was good that they promoted Italian values. In any case, there isn’t really such a thing as “Italian cuisine”. If you have lunch in Alto Adige, in the Dolomites, the cooking is hearty and very Germanic, with lots of smoked meats, strudels and even a kind of goulash. Go to Sicily, where the cuisine features pine nuts, saffron, capers, dried fruit and vinegar, and you might be forgiven for thinking you’re in North Africa. When people talk about Sicilian cooking, they always say, “This is what the Greeks left,” or “This is what the Arabs or the Spanish brought.” In Sicily, the idea of fusion is turned upside down: different cultures have come and gone over the centuries, but the ingredients have stayed still.

‘And we wouldn’t have so-called authentic Italian dishes like pizza margherita, pappa al pomodoro or polenta without ingredients – tomatoes and maize – that came from the New World, which is a kind of fusion as well.’ He points out too that, in the UK, he can’t always do things exactly as he would in Italy. ‘For example, Marks & Spencer asked me to develop a lasagne dish for them, and they were shocked when I wanted to put 12 layers of pasta in it. So we compromised on eight.’

However authentic and high-quality the ingredients, he says, the British eat differently from Italians. ‘At Pizza Express, people order pizza as the main course of a three-course meal: that never happens in Italy, where a pizzeria is a place for a quick snack. Nor do we have restaurants in Italy that serve just pasta, but the new wave of London pasta restaurants – Bancone, Padella and Pastaio, for instance – serve really good bowls of high-quality fresh pasta and sauce. It’s a simple concept, and the guys behind it are usually young British chefs.’ Outside London, he’s not so sure. ‘I went to a famous Italian restaurant in Manchester last year, and I was shocked at what was on the menu. It was like going back in time. But they were still seating tables at 10pm on a Wednesday night, so they must be doing something right.’

He is as optimistic for the future as he is appreciative of the progress made. ‘The change in the past 20 years has been amazing. Take truffles, for example – we take bookings in autumn for two months ahead, and more than half of them want truffles. That never happened before. It’s crazy. And the quality of Italian ingredients, even in supermarkets, is incredible now.’

These days, Locatelli is famous in his native land, too, having served as a judge on MasterChef Italia for the past three seasons. His higher profile in Italy has led him to think of opening a restaurant there. In Lombardy, perhaps? ‘No way! It’s too cold up there. It will be in the south, in Puglia or Sicily. And the kitchen will have a window.’

This article originally featured in Issue 7 of our magazine. Subscribe now to read Club Oenologique in print.

Emily Roux shows her Caractère – and follows the family way 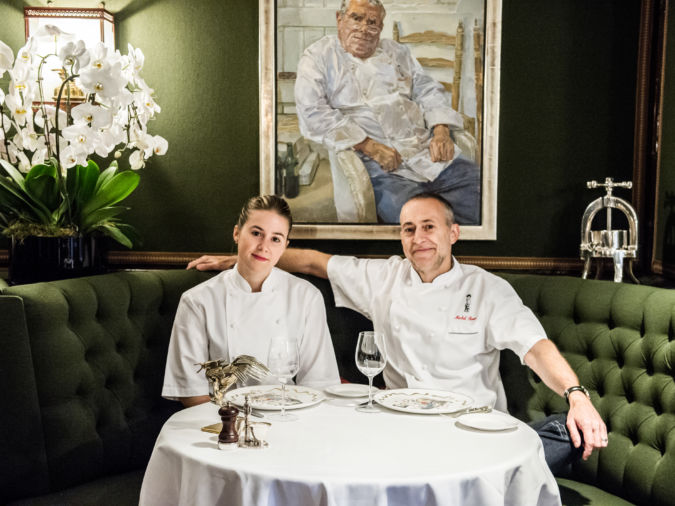 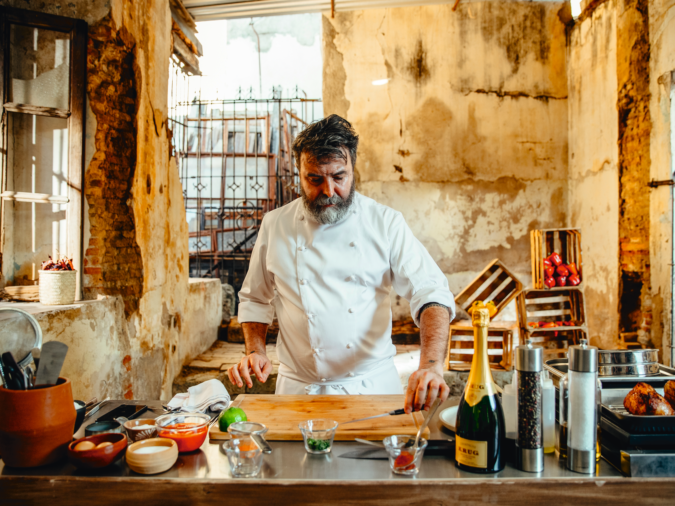