If Krug aficionados had gone down to the woods last summer – or rather if they had been invited – they would have been in for a big surprise. For on a bright September afternoon in the rural English countryside of the Kent Downs, a select group of patrons enjoyed performances from an array of musicians under the curation of singer-songwriter Neneh Cherry to a backdrop of idyllic landscape, locally inspired cuisine and plenty of fine vintage fizz.

The fourth edition of what is billed as the Krug Encounter saw guests, in the words of the Champagne house, ‘whisked away to an enchanting forest for a rollercoaster of magical moments and an immersive sound experience’. Zoë and Layo Paskin, the restaurateurs behind London’s The Palomar and The Barbary, provided the sustenance, and with Krug on tap, guests didn’t go thirsty.

It wasn’t so much the menu that was the draw here, though, as the exclusivity. Tickets – which cost £450 – were only available to ‘friends’ of the house, meaning high-spenders and VIPs. It was the same for the celebration of the 150th anniversary of sister brand Moët & Chandon’s Impérial, which saw elite customers join the likes of Roger Federer, Uma Thurman and Kate Moss at the brand’s restored Château de Saran – a former Moët family home that now welcomes only private guests – for a lavish dinner cooked by three-Michelin starred chefs Yannick Alléno and Dominique Crenn. Then there was November’s limited release of fellow LVMH brand Veuve Clicquot’s Grand Dame 1989, 2004 and 2008 vintages in 15 specially commissioned Baccarat crystal ‘inkwells’ that double as ice buckets, complete with four Baccarat glasses. Within a hidden drawer was a handwritten, wax-sealed invitation to lunch at the Baccarat Cristal Room in Paris, a tour of the Clicquot cellars and dinner and overnight stay at the brand’s newly opened Hôtel du Marc in the heart of Reims. The fact that the property is normally off limits to the public, is, says Stéphane Baschiera, chairman and CEO of Moët & Chandon, the whole point: ‘You have to be asked.’

It’s all part of a wider move by luxury brands to extend beyond the provision of mere products and into experiences. At its most organic level, this comes through an expansion into hospitality – a move that seems only natural for some brands. Take the Fauchon l’Hôtel, which opened in Paris two years ago, as the next step for a brand that counts as one of France’s most recognisable gastronomic names, purveyor of everything from saucisson to macarons. The latter are on tap throughout the hotel, from reception to the lounge, while in the guest rooms the minibar concept is taken to the next level via a Fauchon Gourmet Bar. Presented in a Sacha Lakic-designed pink armoire, it is full of constantly replenished Fauchon delicacies that are curated according to the guest’s tastes, and complimentary throughout their stay (and beyond – guests are encouraged to fill their suitcase). Meanwhile, VIP guests can book tours and demos of the Fauchon lab, above the brand’s flagship boutique and café across the Plâce Madeleine, where all the patisserie recipes, including its signature chocolate creations, are conceived.

That the food and drinks world should be the pacesetter when it comes to branching out in such a fashion is only natural, of course – there is an obvious synergy, after all, between a French patisserie and Parisian hospitality or, indeed, a Champagne house and a Parisian cristallerie. But the trend goes further. By being able to offer top-end customers exclusive access, luxury marques are adding further lustre to their brand as well as a certain feelgood factor. Fabio d’Angelantonio, chief executive of cashmere specialist Loro Piana (also part of the LVMH empire) says he engenders goodwill among his high-end clientele by offering access to upscale experiences – hard-to-get tickets to the opera, a berth on a yacht during a regatta in St Barths. It’s a virtuous circle – by bringing clients together, they network and he gets to learn more about them, while cementing customer loyalty.

Now the trend is going further – and it’s no coincidence that LVMH is to the fore. In 2018 it bought the hotel and travel group Belmond (owner of, among other things, the Venice Simplon Orient-Express, on which Federer travelled to Reims) for £2 billion, a move that chairman and CEO Bernard Arnault described as being ‘entirely consistent with our continued investment in the field of experiential luxury’. One might think last year’s acquisition of Tiffany & Co was purely about expanding the group’s reach in the jewellery sector – but even here, there is more to the move than diamond rings. The Tiffany Blue Box Café opened last month in Harrods, complete with Box Cakes fashioned in the same duck-egg blue and white ribbon aesthetic of the house. The Baccarat Bar will open on the same floor of the luxury London department store in April, serving cocktails out of the brand’s £100-a-piece crystal glasses.

LVMH’s purchase of Belmond augments its already impressive global portfolio of hotels, which includes the Bulgari and Cheval Blanc brands. It was Bulgari that arguably spearheaded luxury fashion brands’ move into hospitality when it opened its first hotel in Milan 15 years ago (to be followed by a second in Bali, and then a London opening, on Knightsbridge, in 2012). Yet the furnishings and aesthetic, while immaculate in their finish and sheen, aren’t immediately recognisable as replicating the aesthetic of the Roman jewellery house. There are no Serpenti chandeliers or Otto mirrors. Rather the idea, says Kostas Sfaltos, the London hotel general manager, is to reflect the ethos of the house via a similar harnessing of hand-crafted pieces with impeccable provenance.

‘This isn’t about amplifying the jewellery brand or providing a platform to sell more jewellery,’ says Sfaltos. ‘It’s about creating an environment in which customers can immerse themselves, in cities where we have a presence, and enhancing that lifestyle experience.’ Bulgari does so by way of generously appointed rooms and voluminous suites tailored to individual guests’ demands. The smallest rooms are 41sq m (many five-star hotels in London start at half that) while there’s a similarly well-proportioned spa, a screening room, and a destination bar with live music.

The London outpost has been followed by openings in Beijing, Shanghai and Dubai; Tokyo, Moscow and Paris (an all-suite opening this September to sit opposite the Georges V) are next on the list. With the exception of Moscow, which will occupy a listed building, all have been housed in properties with a footprint that allows the brand to bend the interiors to its will. ‘The way we select a building is the same way we select a precious stone for a piece of jewellery,’ says Sfaltos. More important than the design, though, says Sfaltos, is the vibe. ‘It’s about giving Bulgari soul,’ he says.

Other watch and jewellery brands have also latched on to the experiential thread, without going to far as to build hotels. A few years ago, Swiss maison Roger Dubuis collaborated with Pirelli to release the limited-edition Excalibur Spider Pirelli Double Flying Tourbillon watch, whose strap was made with rubber from the tyres that took Lewis Hamilton to victory in the 2016 Monaco Grand Prix; the watch came with an invitation to behind-the-scenes access to a Formula One grand prix. Buyers of its latest, one-of-a-kind Excalibur Pirelli Ice Zero 2 also receive an invitation to a Lamborghini driving adventure in the Italian alps tailored specifically to the purchaser’s tastes. Fellow watchmaker Panerai, meanwhile, has released limited-edition pieces accompanied by the chance to put the watch to use in its intended environment. The Submersible Chrono Guillaume Néry, for example, that comes with a private lesson from the world freediving champion at his home in French Polynesia; or the Submersible Mike Horn edition named after the Swiss explorer, who will be taking 19 Panerai-wearing punters to the Arctic ice floes in an expedition to promote environmental and ocean conservation.

The appetite for such exclusive experiences shows little sign of abating, according to Annastasia Seebohm, global CEO of Quintessentially, the luxury lifestyle management group. ‘Our data shows members want to enjoy something exclusive that signals their status as an “insider” and, more than anything else, has an experience attached to it,’ she says. ‘It’s about being part of something meaningful with an experience that frames the product as the souvenir.’ Fflur Roberts, head of luxury goods research at Euromonitor International, agrees: ‘[Modern luxury] is less about showing off wealth and more about what we find meaningful.’

Technology also plays a part, as Doug Stephens, founder of Retail Prophet, points out: ‘As we become increasingly tethered to technology, and as more and more of our behaviour is being guided by algorithms… the craving on the part of consumers for physical, social, serendipitous and emotional experiences is only going to increase.’ And luxury brands, it seems, are increasingly willing to provide them.

Among all the accolades to come Gucci’s way in recent years as Alessandro Michele’s bold, agenda-setting aesthetic has made it the darling of the fashion world, the award of a Michelin star seems a touch incongruous. On closer inspection though, it’s entirely in keeping with the direction in which the luxury world is moving.

The star was awarded in November to Gucci Osteria, the intimate 30-cover restaurant that forms part of the Gucci Garden which opened in 2018 in Florence’s 14th-century Palazzo della Mercanzia, the birthplace of the house. The project is the vision of Michele, who, as the New York Times’ Frank Bruni says, ‘isn’t just selling robes, slippers, handbags… He’s selling a sensibility: eccentric, eclectic, inclusive. And he’s doing it with every mode of communication at his disposal.’ Hence this modern cultural cornucopia comprises a constantly evolving exhibition of both archive and contemporary Gucci pieces, along with memorabilia, contemporary art, and two vividly decorated boutique spaces selling exclusive pieces, from bejewelled sneakers to extravagantly decorated stationary.

And the restaurant? Surprisingly understated in design, its vibrant block green accent is, on first impression, the only clear nod to the aesthetic of the house (almost as conspicuous are the original 13th-century stone coats of arms representing each of the city’s original trades). Closer inspection, though, reveals subtle Guccification. Tableware comes courtesy of porcelain from the Gucci-owned Richard Ginori, complete with hand-painted Herbarium motif. A private dining room employs the Glade fabric of the house’s Décor arm on its wallpaper. Dishes, conceived by arguably Italy’s most famous chef, Massimo Bottura (of the three-starred Osteria Francescana in Modena) are playful, contemporary and cosmopolitan – none more so than Bottura’s signature burger, which is served in a pink Gucci Garden gift box.

What will the world of luxury look like in the new normal? 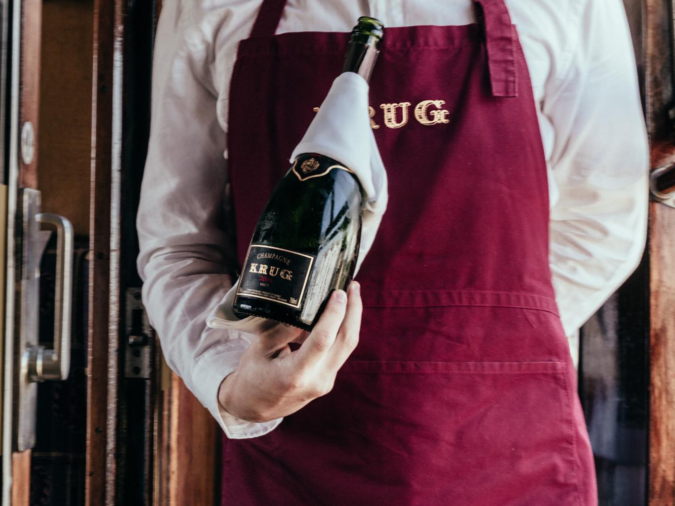