The thermometer is touching zero as I arrive at the Riedel glass factory in Kufstein, a pretty medieval town near Innsbruck in Austria. Inside, the heat hits like the breath of Hades. Nine furnaces, burning at around 1,300°C, run down the centre of the high-ceilinged building. Alongside each, a Master glassmaker (Meister) leads a team of men (female glassblowers are very rare in this world, partly for cultural reasons but also because a woman’s lung capacity is generally smaller) dressed in shorts, T-shirts and heavy protective shoes. Each has his own job in the fabricating process, and between them they produce between 1,500 and 2,000 pieces a day.

Glass is the world’s oldest artificially made material. The first glass vessels were made about 1,500BCE; there is an ongoing debate among historians whether they first came from Egypt or Mesopotamia. We know the Egyptians heated silica, lime and soda in a furnace, wound the resulting molten glass around a dung-based clay mould, smoothed the surface as it cooled then removed the clay to leave a hollow glass vessel. Their skills were passed on to their Roman conquerers, who went on to discover that blowing into molten glass through a hollow pipe opened a whole new world of possibilities for this most beguiling material.

Glass vessels have been made in this part of Europe for millennia – the Romans established glassworks in the region that became known as Bohemia (now part of the Czech Republic) in the first century AD, and the basic process of mouth-blown glassmaking has changed little since. By the 14th century Bohemia was a major centre for high quality glass making, and is where Riedel was established in 1756. Today, most of Riedel’s glassworkers come from here, as well as neighbouring Slovenia and Slovakia, and most return to their families at weekends.

It is not an easy job. The working temperature of glass is 700˚C and it remains malleable for only 15 seconds, so the men have to work fast; they have only a 1mm margin for error. Water bottles are scattered all over – in the winter each man drinks at least four litres of water a day, in summer, twice that. Against a backdrop of easy-listening radio there is an air of deep concentration – this is more artisan workshop than clattering factory.

I watch as, using a long metal pipe, one man pulls an orange-hot bulb of molten glass from the furnace and hands the pipe to the Meister. Standing on a platform about a metre off the ground, which allows him to maintain a fairly upright posture, the Meister carefully lowers the slowly stretching, pear-shaped glass into a mould in a water bath on the floor and gently blows down the pipe, rotating it between his fingers. He releases the mould then, with a dramatic swoop, raises the pipe into the air, checking the now-solid glass for imperfections, and hands it to an assistant. The base of the glass is reheated in a gas flame and another blob of molten glass is attached before being stretched out with tongs to form the stem. The glass, still attached to the pipe, which is being constantly twirled, is handed on to make the base via the addition of a third blob, which is flattened between two wooden blocks. Finally, the rim of the glass is cut from the pipe and left to be cooled before finishing.

How long does it take to become a Meister? It can vary, says Hasan Erdogan, a Meister originally from Turkey who has worked at Riedel for 20 years. ‘It’s mostly to do with personality and feeling. Some get it in five years or less; some will take many more years. Very much, it’s an art as well as a craft.’ A few of the glassworkers have been at Riedel for 40 years or more, and their fathers before them, but such veterans are becoming rarer. ‘It is really, really hard and very skilled work, and these days youngsters don’t want to learn,’ says Erdogan, one of the few glassmakers here who live locally; most come from further afield.

We have twelve nationalities working here. We are bound together by what we do, not by the languages we speak

‘There are no glassmaking schools left in Austria – people these days want more lucrative and less physically demanding jobs – but there are still some in these other countries,’ Holger Müller tells me. Holger is Riedel’s Hüttenmeister – the ‘master of the house’, in charge of all their glassmakers. He is tall, elaborately tattooed and sports a splendid ZZ Top beard; his fingers bear chunky silver rings and his eyes gleam with zeal.

‘We have 12 nationalities working here,’ he says. ‘Some were at war with each other until not long ago but we are bound together by what we do, not by the languages we speak.

‘I grew up near a glassworks in the Black Forest,” he goes on. ‘As a boy, I was fascinated by these big men working at the furnaces, making this incredible, delicate glass.’ Müller has since worked in the US, France, Japan, Canada, Russia and Iran. ‘There is always work for good glassblowers,’ he grins. ‘It’s a dying art, but it still excites me as much as it did when I was a child.’

There is nothing intrinsically superior about mouth-blown glasses, largely due to companies such as Riedel perfecting machine-blown techniques – the only way to tell them apart is the slightly ridged base on a mouth-blown glass – but there is something undeniably exquisite about them. The creation of glass is the result of an extraordinary alchemy, the transformation of basic matter – silica, lime, alkalis – to a molten mass as hot as magma that then cools to a transparent solid, its beauty heightened by its extreme fragility. Glass refracts, reflects, and transmits light like nothing else: it is made from the humblest of earth-bound materials but, crafted with skill, it appears ethereal, as if not of this world at all. 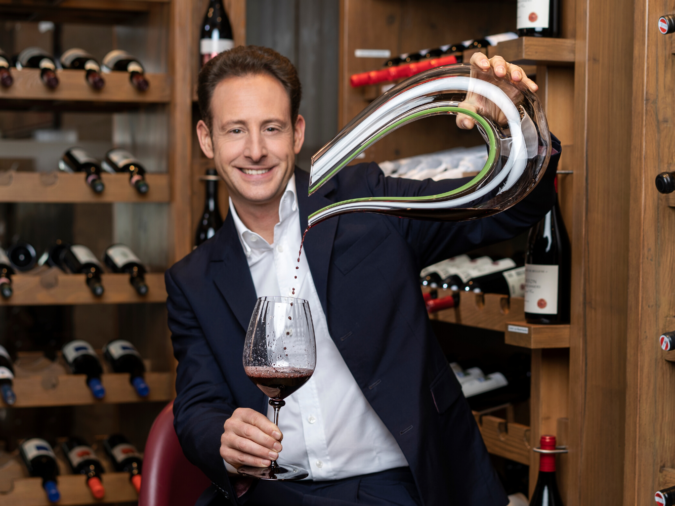