Master Sommeliers are often multitaskers. Some play championship chess, others skydive, or paint, or cycle competitively. But Ronan Sayburn must be the only one who speaks Dwarvish. “I used to be able to translate the runes in Tolkien,” Sayburn tells me.

Sayburn runs the wine programme at London’s 67 Pall Mall, as well as his own RS Wine Academy. For the past year he’s been a reassuring, barrel-chested presence on 67’s Zoom programme – the club pivoted rapidly at the beginning of the UK lockdown last March and within days was running dozens of masterclasses – and he expects to be travelling again as soon as the club’s new outposts in Singapore and Bordeaux open. He’s also anchoring the soon-to-launched 67 Pall Mall TV, which will report on the world of wine from London, Bordeaux and Singapore.

One of only 214 Master Sommeliers in the world, a winner of the fiendishly difficult UK Sommelier of the Year competition as well as a clutch of other major awards, Sayburn has worked at the highest level in some of the UK’s top restaurant groups for the past two decades. He’s also crammed more diverse experience into his 51 years than most of his peers on the international wine circuit.

An ultra-marathon runner (the 52-mile version) he’s a nine-times veteran of the Médoc Marathon – an event made even more gruelling by the fact that competitors have to stop for wine and canapés at the châteaux they pass through. Sayburn is also a qualified scuba-diving instructor, having spent 18 months salvaging World War II wrecks off the coast of Thailand, an occupation he describes as so dangerous that “one little thing snowballs rapidly into you dying, basically”.

Brought up in Scarborough, he got the hospitality bug after a stint as a cook-cleaner-receptionist in a local pub, which “kind of diverted” him from the career in geology he’d been planning. Catering college led to restaurant manager positions, “but it was wine that fascinated me.” Happening on an article about sommelier and hotelier Gerard Basset he wrote to him for advice, and was pointed to Le Manoir aux Quat’Saisons, where he was offered a trial. “And all of a sudden, little Ronan from Yorkshire was sitting next to Raymond Blanc at staff lunch. My mind was blown.”

Sayburn’s CV is now a roll call of famous and ground-breaking establishments. Le Manoir was followed by Pied à Terre, the Gordon Ramsay group (where he managed an international team of more than 60 sommeliers), The Greenhouse restaurant, the Hotel du Vin group and the Dorchester Collection. It was his eight-year stint with Ramsay that impacted him the most, however. “Working for Gordon meant 16-hour days,” he says. “I was starting at nine in the morning and finishing at three the following morning.”

These days, he’s content to work on his boxing skills (possibly brushing up on his Dwarvish at the same time), and continue to abide by a lesson he learned very early on: hard work pays off. Scroll down to read his complete Life Lessons…

What was your childhood ambition?
I wanted to be an architect. Instead, I signed up to go to the University of East Anglia to do a degree in geology, and I very nearly became a geologist. But that summer I got into catering with a part-time job working behind a bar in Scarborough. Then they asked me to go in the kitchen to do lunches – microwaving and deep-frying mostly. Then they asked me if I’d do the cleaning, so I ended up going in at seven in the morning, cleaning the place, stocking the bar, then going into the kitchen and doing lunches, staff meals, then a couple of hours on reception. It kind of diverted me from geology.

What do you know now that you wish you’d known when you were 21?
Hard work will pay off – but I think I must have known that at the time.

What exercise do you do?
I used to run a lot, but I do more weights and boxing these days. It’s just training – I’ve never been in the ring with anybody, although that might be fun. I know people who have done a lot of training and feel pretty confident, then they start sparring and it’s like Mike Tyson said: “Everyone has a plan until they get punched in the mouth.”

What is the character trait you most wish you could change in yourself?
Some days it’s to be less trusting with people, and some days it’s to be more trusting. Sometimes you trust someone and they let you down, or you don’t trust them enough and don’t see their best side.

What is the most expensive thing you’ve ever bought (aside from property)?
An Audi TT and a Rolex Submariner.

If you could live anywhere, where would it be and why?
I’m very happy in London but I’d love to live in San Francisco. It reminds me of Melbourne – there’s a relaxed vibe, less of the big-city feeling, and it’s on the sea and close to wine country so that’s great. Specifically, if I lived there, I’d want to live in Sausalito, just over the Golden Gate Bridge.

If you could do any other job what would it be and why?
I’d like to be a scuba-diving instructor. I’m also doing my light aircraft pilot’s licence – I’d like to fly a helicopter. The ultimate would be to fly an air ambulance – a proper machine!

What luxury item would you take with you to a desert island?
A bookcase full of all those books I never have time to read. History books, all the Brontës, all of Dickens, War and Peace, Ulysses…and all of Tolkien, of course.

What haven’t you yet achieved that you want to?
I’d like to do a parachute jump.

If you were king or queen of the world, what’s the first law you would enact?
I would make sure the richest one per cent were stripped of their assets, and eradicate poverty and hunger. Those people who say they can’t live on less than £100m would soon be whittled down to a more realistic number.

What’s your guilty pleasure?
Cigars. I probably smoke about 20 a year. I’ve moved away from Cohibas now to more mellow brands like Hoyo de Monterrey, and I go for a 45-minute smoke rather than anything longer.

What’s your secret talent?
I used to be able to read Dwarvish – I could translate the runic scripts from Tolkien. It’s a bit of an under-the-table kind of skill.

When were you happiest?
I’m usually pretty happy but some of my most exciting moments have been diving, taking that three-minute drop – like a stone – onto the deck of a sunken ship. On a deep dive you’re carrying 200lb of gear, crowbars and other tools, and you go down very fast indeed. For the first few seconds you’re in the thermocline and it’s quite clear, then you quickly lose visibility and it becomes very misty, before you see a shape emerging – the funnel and deck. Then you slow yourself down and you’ve arrived. It’s pretty exciting.

Whom do you most admire?
Reading Barack Obama’s autobiography, he seems a very smart guy with strong principles. Many would disagree and say he was a terrible president, of course, and I can’t comment on the politics but he is obviously an honourable, compassionate person with empathy. With the power that was given to him, he wanted to improve things.

What’s your greatest regret?
Not working in France. I was going to go to Alain Ducasse’s Monaco restaurant Le Louis XV, but a visa problem put an end to that. Working abroad for a few years in restaurants would have been great – a stint at The French Laundry also fell through.

What album, boxset or podcast would you watch/listen to on a night in alone on the sofa?
The Sopranos – a classic.

What’s the favourite thing in your wardrobe?
Probably an Armani suit. My first ambition was to have a Jaguar, and the second an Armani suit. I used to have three of them but they all went when I lost my luggage on a trip to Chile.

What’s your favourite restaurant?
Le Gavroche in London, and most places in Jerez. I love that sherry-and-tapas scene and those bars that are dark but warm.

What time do you go to bed?
When I get tired. I don’t have a set routine, but probably by 11pm. 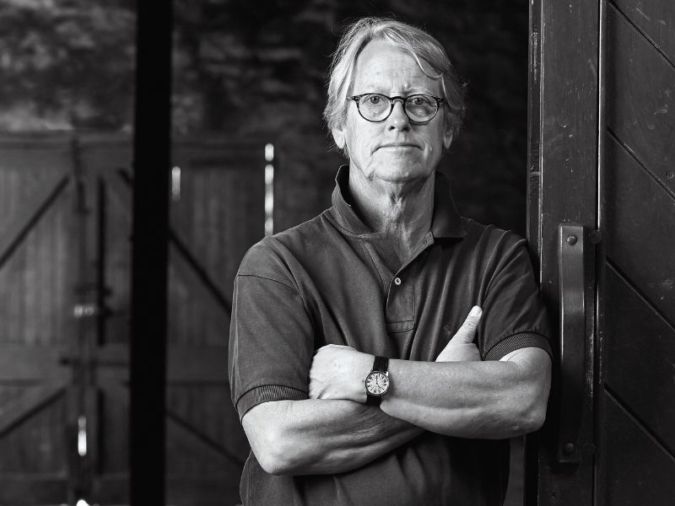