There are very few people who can claim to have started a revolution, but Lesley Gracie is one of them. She would never make such claim (she won’t even admit to having a secret skill), but that is what she did. Back in 1999, when she was a senior member of the technical team at William Grant & Sons (she joined in 1988), the president Charlie Gordon tasked her with creating a new gin in two antique stills, a Bennett and a Carter-Head; the new gin should have ‘more depth and character’ than what was on offer at the time, he stipulated.

In the late 20th century, this was an odd request. It’s difficult to imagine now, but gin wasn’t in any way trendy – when you asked for a G&T you had a choice of Gordon’s or Beefeater and that was about it. What inspired Gordon? ‘He was just an amazing guy, and he saw an opportunity for gin to come again. The cocktail culture was just starting to kick in, and obviously gin is a good ingredient for lots and lots of cocktails…’

It took Gracie and the team about eight months, distilling and blending dozens of botanicals – ‘some weird things like peppers, and berries that just didn’t work’ – until they had something they thought they could show Gordon. He’d asked for a style which reflected the essence of an English country garden, ‘and you can’t get much more English than cucumber sandwiches and roses’.

The final blend was approved and all that was required was a name. ‘That came from Janet Sheed Roberts [who died in 2012 at the age of 110]. She was the last surviving grandchild of the founder William Grant – she could actually remember him. She was asked to think of a name, and she came up with Hendricks, who was the gardener at the family home.’ An apostrophe was added, and a legend was born.

Hendrick’s, which now has a splendid home in the form of the Gin Palace, a multi-million-pound distillery and laboratory with Victorian-style hothouses, opened in 2018 at Girvan in Ayrshire, has spawned a thousand imitations – and Gracie has watched developments with fascination. ‘When you look at some of the gins that people have produced, there are some amazing drinks out there. I’m fascinated by gins that use local botanicals – it’s incredible the difference they can make.’

Gracie has always been interested in plants. ‘The idea of taking something off a tree, or a bush, or a flower and exploring just what aromas and flavours you get from that particular plant. I just find it fascinating.’ In 2013, she went on a two-week expedition to the Guiana Highlands of Venezuela to research new botanicals, a trip that resulted in experimental batch distillations such as Scorpion’s Tail, which was presented to Hendrick’s aficionados around the world. ‘We had some pretty wild events,’ Gracie remarks.

In fact, ‘wild’ isn’t an adjective that comes to mind when talking with this self-effacing 64-year-old (after all, the most extravagant purchase she’s ever made is a camper van). But distillers are alchemists not scientists, and Gracie’s colleagues certainly don’t see her as part of the ordinary white-coat-and-test-tube brigade.

When she was induced into the Gin Magazine Hall of Fame this year, they described her as an ‘eccentric spirit genius’. Which of those descriptors does she best identify with? ‘Oh, eccentric, definitely. My granddaughter describes me as “seriously weird”. You can’t argue with that. You just have to go with it.’

Like a lot of children I went to ballet class, and for quite a while, until I was 12 or 13, I was very keen on being a ballerina. That was my ambition, until I kind of realised that I was never going to be good enough to make it to the top. But I kept on dancing for years; as I got older, I taught the younger ones. I thoroughly enjoyed that.

Appreciating just how fast time flies, and if you’re going to do something you should just get on and do it. Time goes quicker and quicker year by year. At 21 you think that getting to 22 is ages away, whereas when you get to 60, 61 is suddenly here and gone.

I’m a dog walker. I also enjoy fly fishing, but my dog, a golden retriever called Jock, gives me exercise. I go fishing for the solitude – you can’t get a phone signal at some of the trout ponds around here so I can just go and be on my own, just become part of the scenery for four hours or so.

I’m quite impatient. If I want to do something or want something done, I’m going to get on with it. I’m not waiting.

A few years ago, I bought a motor home, a T-Line 590. When we set off we have no idea where we’re going to go. We get to the top of our street and then say, ‘Are we going right or going left?’ I put in beer, wine, gin, tonic, and then a few biscuits and things. We don’t tend to cook much.

I really like my own house [in Girvan, near the Hendrick’s Gin Palace], but if I had to live somewhere else I would love to live in the Galapagos Islands.

I would have been a vet. But I went down the chemistry route, as opposed to the biology route.

Am I allowed to take my dog?

I’d like to be able to ride a horse. When I was a kid, my brother put me on a donkey on the beach and it ran off with me. I’ve never quite got over my fear so I’d like to get to the point where I feel happy getting on a horse.

It would be a law that says instead of trying to destroy each other, we help each other. There are so many people in desperate need – this law would channel the energy that goes into fighting into doing good, instead.

David Attenborough, the historian Brian Cox, and Billy Connolly. That would be a lot of fun.

I think I’ve been a very lucky person. I had an amazing childhood and it’s gone on from then. I’ve got a wonderful family that I can always talk to. I don’t think I’ve ever really been unhappy.

People who are willing to help others deserve admiration. About six weeks ago I volunteered with my granddaughter at a dog rescue centre. The lady that was running it had dogs from Russia and Romania; she’d got them to the UK and was trying to get them back to being dogs again as opposed to these poor persecuted little souls. These are the people that are actually willing to try and do something.

Not spending enough time with the people that I can’t spend time with now. Not to be able to go back and spend just a little bit more time with them.

Elton John’s Goodbye Yellow Brick Road from 1973. I rediscovered it a few months ago.

Many years ago my dad bought me a T-shirt with animals all over it. It was one of these moments: ‘Look what I got for you,’ and I was like, ‘Holy crap, Dad!’ I think it was a kid-sized one, but he’d got a big kid size so it fit me. This was probably 25 years ago. I’ve still got it and I’ll never throw it out.

There’s a little restaurant near us called Wildings. It’s right on the coast, so you sit there looking out over the beach, which is where I walk the dog.

Lesley Gracie has just helped develop the William Grant & Sons Batch & Bottle range of cocktails including Hendrick’s Gin Martini, in collaboration with international bars including Nauticus in Edinburgh, available now at Harrods, Master of Malt & Amazon at £25 for a 50cl bottle. 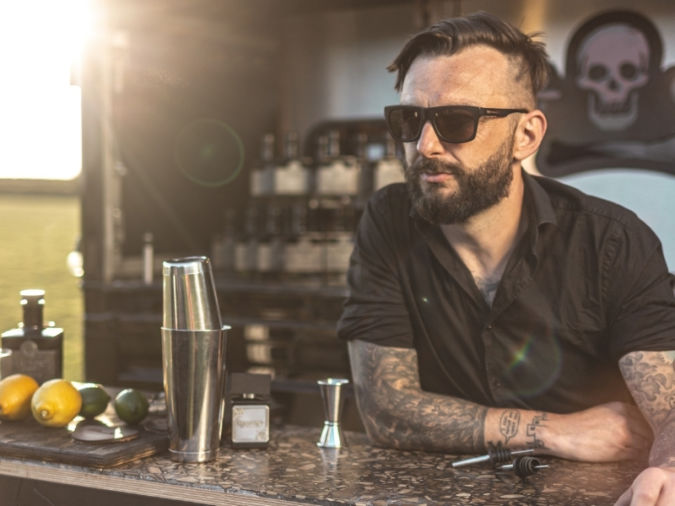