Many accomplished chefs followed a circuitous route to the kitchen. Some started out in finance, some were gardeners, or chemists, or veterinarians; Ciccio Sultano, though, seems to have been hankering after chefs’ whites most of his life.

A native of Sicily, he landed his first job in a restaurant when he was 13, at the Pasticceria Suite di Vittoria. “I did everything in that place,” he recalls, “from making cocktails to serving hot dishes.” He stayed there seven years, before moving to a spaghetteria, where he had his first epiphany. The young Sultano must have been fizzing with energy and ambition (indeed, he’s not lacking in confidence today – when we asked who he admired most, his reply was, ”Do you mean apart from myself?”). As a teenager, he was poring over gourmet magazines and absorbing cooking lore in any way possible. At the spaghetteria, he started experimenting, sourcing the finest ingredients he could afford, until a kindly manager took him aside and told him the margins wouldn’t allow for that sort of thing. “’You’ll understand when you have your own place,’ they said. So, that was it. I left to open my own place.”

Before settling permanently in Sicily in 2000 and opening Duomo, Sultano spent time in Germany and New York, exploring the myriad ways Italian cooking has been exported around the world, and working for such celebrated characters as the restaurateur and TV star Lida Bastianich.

He is now the owner of Duomo in Ragusa Ibla, which won its first Michelin star in 2004 and its second two years later; two trattorias – I Banchi, also in Ragusa, and Pastamara in Vienna; as well as his laboratory, Cantieri Sultano.

It’s crucial, in understanding Sultano, to grasp that he is Sicilian first, Italian later. He constantly references the island of his birth and upbringing, characterising Sicilian cuisine as above all, “generous”, the result of centuries of invasion and colonisation by Phoenicians, Greeks, Arabs, Normans and Spaniards, among many others, who have all left influences of their food, wine and customs.

Sultano radiates the confidence of a self-made man at the peak of his career. There is no personal trait he would alter, he says (“I’ve been through all that”); when asked who his fantasy dinner guests might be, he naturally invites Alexander the Great and Hannibal. Underneath it all, though, there is a strong sense that he is not working for personal gain so much as to disseminate the gastronomic glories of the community he grew up in. As he says, the phrase he most overuses is, “I am Sicilian.”

To grow up well: I made time to study, but most importantly to learn and understand from that and to value the gift of choice.

What do you wish you’d known when you were 21?

I actually wish I had known less of the things I was already familiar with. Reading gave me great insight into life, and with it, possibly too much understanding of what life was for someone who was only 21 years old.

Running and weights. Ragusa is built on a hill, and during this second lockdown, before a daily run up and down its baroque streets for a minimum of 6km, I do about 15 minutes of weights.

None really. I’ve been through all that and have finally found contentment in myself.

A pair of Barker dovetail shoes. I was 17 years old when I got them. They were a huge expense to me back then and they are still among my most valued belongings.

Etna, because it has everything. It is close to the sea, it has forests, the volcano, vineyards and amazing mushrooms.

I would be a farmer.

Le Calandre by the Alajmo brothers, in Padua. Every time I sit at a table in that restaurant, I am very happy indeed. I really admire them: as chefs, restaurateurs and entrepreneurs.

My pair of elegant English shoes.

I would abolish all borders and establish universal, social equality.

Firstly, I’d invite Alexander the Great. I’ve always been fascinated by what it must’ve taken to build such a vast empire at that point in history. Hannibal – setting out from North Africa to take on the might of the Roman Empire and coming over the Alps with elephants was beyond ambitious. Al-Idrisi – an Arab Muslim geographer, traveller and scholar and one of the world’s most famous cartographers (he lived in Sicily for a while too). And finally Count Giuseppe Tasca d’Almerita, who owns the Tasca D’Almerita estates here in Sicily including its vineyards and farms. He is also the grandfather of Giuseppe and Alberto who run it now. I’d just love to sit with them all, share a glass (or two) of Rosso del Conte from Tasca and listen to what it was inside them that created all that drive and ambition.

Being too instinctive – I never choose between my stomach and my heart.

To predict the unpredictable. I make decisions by intuition, when nobody knows what to do. It’s always stood me in great stead.

Above everything else, when my daughter was born. But I must confess, a close second were the Michelin stars.

Except for myself, do you mean? (laughs)

Not having enough confidence in myself when I was 17 years old to leave Sicily and study cooking in Lyon.

When my body tells me to. I am someone who usually wakes up early in the morning and rests a little in the afternoon when I can. 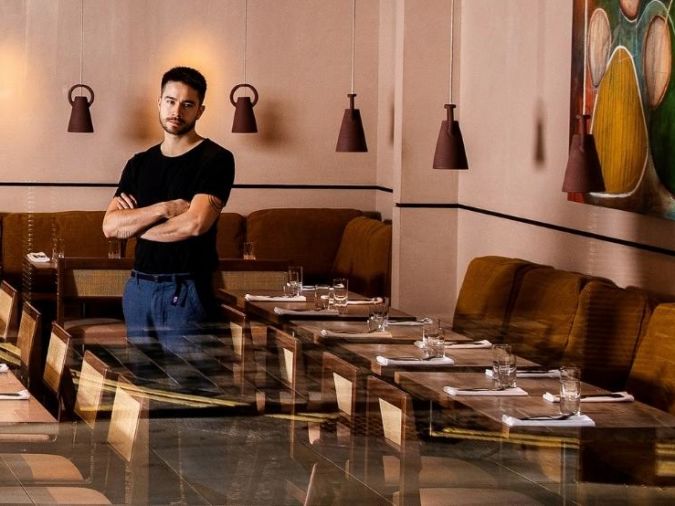