Napa wine, as a style, has frequently been compared to a pendulum swinging: in the direction of popular opinion or towards high scores from wine critics. For Massimo and Erin Di Costanzo, who are among the newest generation of vintners to venture into the renowned world of Napa Cabernet winemaking, it’s not about swinging, chasing, or following the trend; nor it is about rejecting tradition, either. Instead, the Di Costanzos, whose first vintage was in 2010, are slowly and steadily crafting wines that both honour the region’s flagship variety and are appreciated on a global scale.

‘It can’t just exist in this sphere,’ says Massimo, winemaker and graduate of the UC Davis enology programme, whose résumé includes Napa hot shots like Screaming Eagle and Ovid. Instead, he strives to make wines that his grandfather, a fisherman from Positano on the Amalfi Coast in Italy, would like.

Erin, a Sommelier who moved from New York City to work as the Wine Director for Press Restaurant in Napa Valley – which boasts the deepest and oldest collection of Napa Cabernet in the world (she’s thusly something of an expert on both Old and New World renditions of the noble grape) – says that with Di Costanzo wine, she and her husband have honed in on both the graphite, herbal and mineral side of the wine, as well as the trademark fruit that shines so brightly in Napa. ‘We look for the savoury, spice-driven and mineral side of Cabernet,’ says Erin.

To achieve those subtleties and that complexity, Di Costanzo sources fruit from, very specifically, established heritage Cabernet Sauvignon vineyards with volcanic soils. Their first wine was made from Farella — a legendary vineyard (grapes from this site have been sold to Opus One, Mondavi, Lail and Merryvale) that Massimo was introduced to when he was working for Philippe Melka, a famous consulting winemaker in both Bordeaux and California (for Haut-Brion, the Moueix domaines and Dominus, among many others).

Deep volcanic soils and a long growing season (Coombsville is the coolest sub-AVA in Napa Valley by virtue of its proximity to the San Pablo Bay), contribute to a wine that is both dark and brooding and soft and herbaceous. The tannins are firm, certainly, but also succulent and mouth-watering.

Having established themselves as ‘Coombsville folk’ (there is a bit of the ‘Wild West’ feeling in that part of the Valley), the Di Costanzos were on the top of the list for another legendary grower nearby, John Caldwell, when the programme for Dunn’s Napa Valley designate wine changed and Randy Dunn decided to give up his coveted Caldwell fruit source. ‘I think John wanted to work with a winery that was going to be around for a while,’ reflects Erin.

The Di Costanzo Caldwell Cabernet Sauvignon is a simultaneously a counterpoint and complement for the Farella wine: ‘Chilly and fresh’, as Erin describes it, the wine is all crunchy red fruit, fresh roses and raspberry tea: a delicious wine that transcends labels and expectations.

‘Chilly and fresh’, as Erin describes it, Farella wine is all crunchy red fruit, fresh roses and raspberry tea

The newest vineyard to join the Di Costanzo line-up of single-vineyard Cabernet Sauvignon is not, in fact, even in Napa. The Monticello Vineyard, on the western side of the Mayacamas — the mountain range that serves as the geographical border between Napa Valley and Sonoma – was planted in 1968, and meets the Di Costanzo standard for both heritage plantings and volcanic soils, even if it doesn’t respect the sanctimonious (and perhaps arbitrary) ‘Napa’ designation.

Bathed in sunlight every afternoon and well above the fog line, the Monticello Cabernet has depth without heaviness; intensity without fatness. Own-rooted and dry-farmed, the wine gives you everything you would hope for from a high-elevation volcanic site: salinity, bloody minerality, orange zest and pink peppercorn. Massimo references an Italian saying ‘aqua sapone’— meaning ‘soap and water’ or ‘true beauty without makeup or artifice’.

Like many winemakers with unshakeable standards who have been forced to be nimble in recent years, Di Costanzo has created a second label called DI CO, making wines to both ‘fill our glasses and fill our souls,’ as Erin puts it. The range consists of Cabernet, of course, (‘still serious, but a way to extend our story’) as well as a Pinot Noir and a Chardonnay, both from heritage sites for those respected varieties.

‘I hope people will trust us and come with us on this journey,’ says Erin. Given that some of the best restaurants in the world (Eleven Madison Park, Single Thread, The French Laundry) already have, the hope is not exactly a coin being thrown into a well. Erin and Massimo’s dedication to artistry and integrity along with a strong sense of both the Napa community and the international world of wine makes for wines that are distinct, delicious and important. Hopefully, Massimo’s grandfather agrees.

The wines of Di Costanzo are distributed in the UK by Justerini & Brooks. 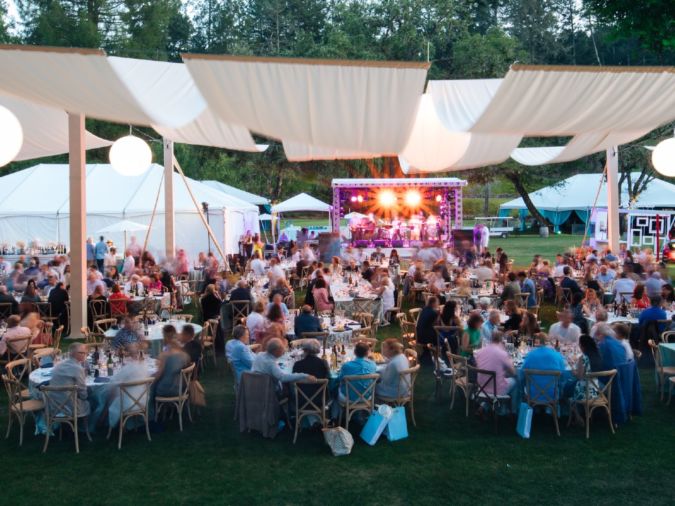 The smoke effect: Napa winemakers battle with the legacy of wildfire