The Napoleon Cellar deep under the ancient wooden floors of Berry Bros and Rudd has been the scene of many tastings, but few so rare as the one that took place earlier this week.

The occasion was the launch of Fiona Morrison MW’s 10 Great Wine Families, the second title in Steven Spurrier’s Academie du Vin Library (a sister company to Club Oenologique). The book was first published in Flemish – this is its first publication in English.

And the wine on offer was enough to make even the handful of hardened wine journalists, rubbing shoulders with a few dozen Berry Bros clients, chatter excitedly and leave spittoons unused.

Morrison’s book charts the histories – “the triumphs, trials and tribulations” as the blurb has it – of ten great winemaking families, all of whose wines were opened for tasting on Wednesday night.

Launching her book, Morrison, who is a member of the Thienpont family, owners of Pomerol’s legendary Le Pin, paid tribute to the veteran wine figures who had supported her through the writing.

“Thanks to Steven (Spurrier) who believed in the book and to Hugh (Johnson) who wrote the foreword. They are two of my heroes in the wine world – I’m deeply honoured to have them at my side tonight.”

She then thanked the families for their “esteem and friendship” over the years. To the Knoll family of Wachau: “I’m so proud to see you here. Thank you for teaching me about tannin in white wine”; to Dirk Niepoort of the great Port family: “Thank you for saving the Douro, and for bringing still wine to the region”; to Angelo Gaja: “Maestro”.

Morrison’s book charts the histories of ten great winemaking families, all of whose wines were opened for tasting on Wednesday night

The ten families covered in the book are a who’s who of some 900 years of European wine history: Frescobaldi, Gaja, Torres, Perrin, Knoll, Thienpont, Niepoort, Palacios, Muller and Liger-Belair.

Many of the wineries’ principals were there: Lamberto Frescobaldi was pouring his 2006 Castelgiocondo Ripe al Convento in magnum; Gaja looked after his 2015 Sorì San Lorenzo; Morrison herself had brought a magnum or two of her 2008 Le Pin.

Egon Muller couldn’t be there, Morrison explained, because “he tends the vines himself and he sent many apologies, but he just had to be in his vineyards”.

There were then tributes from Johnson, and Spurrier – who said the book “brought the families to life. I’ve known the Frescobaldis for 40 years but I discovered some wonderful new things about them”.

After that, the party began: the wine lovers crowding the Napoleon Cellar (built beneath the 400-year-old shop in the 18thcentury, and used by Napoleon III to plot his return from exile) then took up their glasses and began the serious business of tasting – and drinking – the stellar line up of bottles in every corner.

10 Great Wine Families is the second title in the Academie du Vin Library. The first is Michael Broadbent’s seminal Wine Tasting, first published in 1968 and regarded as one of the essential works on wine. Both titles are available through the Academic du Vin Library now. 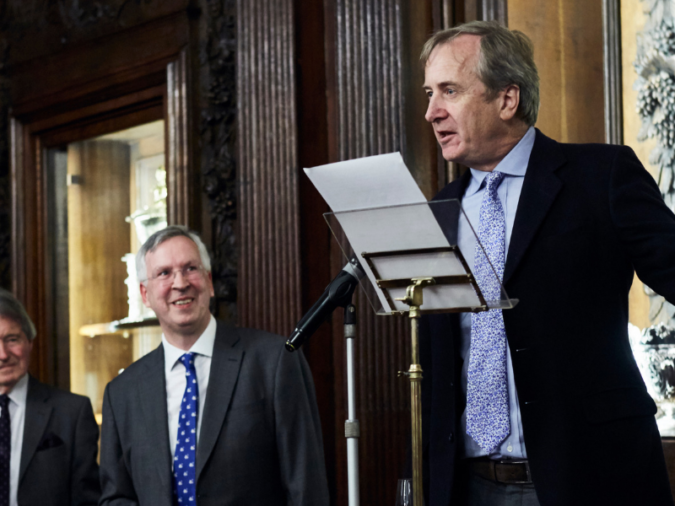